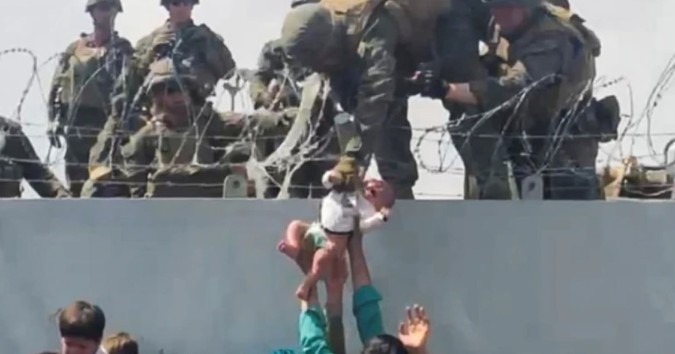 You know the signature picture from the Afghanistan debacle.

It was the Marine who helped hoist a baby over the walls of the Hamid Karzai International Airport in Kabul last month.

Well now he's under investigation for making a cameo appearance with Donald Trump at a rally in Georgia Sept. 25.

His name is Lance Cpl. Hunter Clark, and he was simply helping guard the Afghanistan airport in August. A picture of him went viral as he helped save a baby lifted up by an Afghani parent outside of the airport walls.

It struck most people as a poignant. touching, humanitarian act. He probably didn't think it would get him in trouble with Joe Biden's military. But, hey, these are strange times in America. Lot's of people are getting in trouble these days – especially when they reflect badly on Biden's numerous fiascoes.

At the event, Trump kept 13 front-row seats empty with flags on them in honor of the 13 U.S. service members who died in an ISIS-K suicide bombing near the airport in August – 11 Marines, a Navy corpsman and an Army special operations soldier were among the casualties at the airport's Abbey Gate.

Later, Trump invited Clark, who is from Georgia, up on stage to say a few words.

Clark introduced himself as "the guy that pulled the baby over the wall," and said it was "definitely, probably one of the greatest things I've done in my entire life."

The Marine choked up as he said: "I just want to thank all the support from y'all. It really means a lot and I'm glad to be home now."

He then shook Trump's hand as the crowd chanted: "USA!"

Clark didn't endorse Trump. Nothing else was said about the appearance. But he became another enemy of the people to Biden – another American soldier who maybe likes Trump.

Clark did not wear his Marine uniform while on stage with Trump, and he did not campaign for any political candidate – even though the former president was there to rally for three different Republican candidates in Georgia.

The appearance, however, comes as the military is increasingly cracking down on servicemembers' behavior.

"The 24th Marine Expeditionary Unit (MEU) has initiated a command investigation regarding LCpl Hunter Clark's attendance at the event last weekend to determine if any DoD policies were violated," Capt. Kelton Cochran, a spokesman for the 24th Marine Expeditionary Unit, said. "Any details pertaining to this incident are not releasable while the investigation is being conducted."

Cochran also said that Clark was not the Marine shown in the viral photo from Aug. 19 of an infant being pulled over the wall. Multiple Marines were seen helping desperate Afghans to safety during the airlift, and Clark did not provide specific details of when he helped the child.

You can see what a big offense this is in today's military.

He'll probably be charged with treason for claiming credit for the baby hoist. Who knows?

Do you see a pattern here?

I can't believe it! Who would have thought it would come to this in America?

Can Joe Biden be this petty? Is there anybody safe from his jealousy, this rage against Trump?

Where will it end?