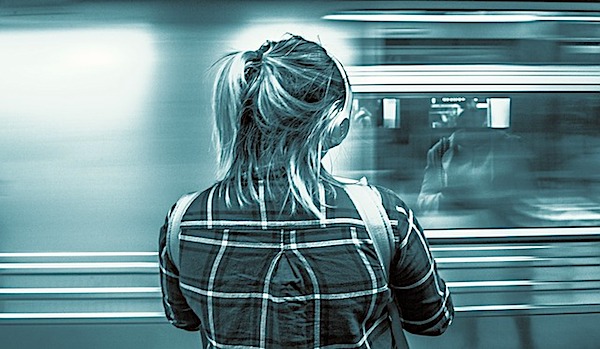 (Image by Robert Hovor from Pixabay)

The New York Police Department is searching for a woman caught on video shoving another woman into a moving train entering a Times Square station on Monday, Fox News reported.

The female suspect can be seen getting up from her bench and pushing the woman into the moving train before calmly walking away. Police described the woman as being in her 30s, sporting a multicolored scarf, black shirt and beige pants, Fox News reported.

The victim, 42, did not fall into the tracks, but hit the side of the moving train and ricocheted back onto the platform, Fox News reported. Suffering from serious, but not life-threatening, facial injuries, according to police, the victim was taken to a nearby hospital, PIX 11 reported.

Investigators say there was no exchange of words between the suspect and the victim before the shoving incident, NBC reported. The assailant was able to escape the scene, though NYPD officers interviewed witnesses and canvassed the area after the incident.

Detectives were unable to identify the suspected assailant as of Monday, and NYPD Crime Stoppers asked anyone with information to call 1-800-577-TIPS, Fox News reported.

A man in his 30s reportedly hurt himself by accidental gunshot at the same transit hub later in the day, but the two incidents are not thought to be related, NBC reported. The same NYPD officers who responded to the shoving incident were the ones who responded to later reports of gunfire.

Officers were on the scene both above and below ground, and an investigation into the shooting is ongoing, NBC reported.