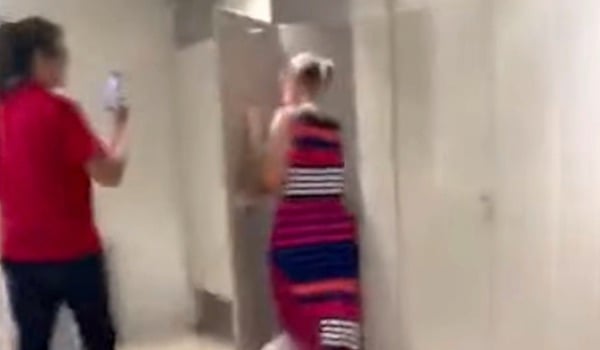 Sen. Kyrsten Sinema, D-Ariz., being stalked and recorded by activists inside a women's restroom. (Video screenshot)

Progressive billionaire activist George Soros is funding the left-wing group whose members harassed Sen. Kyrsten Sinema D-Ariz., in a bathroom over the weekend.

Activists with Living United for Change in Arizona videoed Sinema while she was teaching at Arizona State University on Saturday after she refused to meet with the organization to discuss her opposition to the $3.5 trillion Build Back Better spending bill.

President Biden on Monday dismissed the harassment of Sinema, as well as of Sen. Joe Manchin, D-W.Va., who was confronted by kayakers on his boat, as "part of the process."

"I don't think they’re appropriate tactics, but it happens to everybody," he said.

Back in Jan, Biden told staffers that he would “fire you on the spot” if you didn’t treat others with respect.

When asked about the tactics of activists harassing Sen. Sinema in bathroom he very softly criticized and downplayed as “part of the process.”pic.twitter.com/IroUgc4URZ

Sinema and Manchin are the only Democrats opposing their party's $3.5 trillion bill. Their votes are needed to reach the 50 required to pass the reconciliation bill, with Vice President Kamala Harris providing the deciding vote.

The Free Beacon noted Arizona law forbids photographing or videoing another person in a restroom "where the person has a reasonable expectation of privacy" and is relieving themselves or undressing.

The activists had their phone camera going when Sinema entered the bathroom, and they didn't stop until she left. The activists are heard asking Sinema to support a path to citizenship for 7 million illegal immigrants in the United States.

🔴BREAKING: Blanca, an AZ immigrant youth confronts @SenatorSinema inside her classroom, where she teaches @ ASU. "in 2010 both my grandparents got deported bc of SB1070...my grandfather passed away 2 wks ago & I wasn't able to go to Mexico bc there is no pathway to citizenship." pic.twitter.com/JDZYY2fOD2