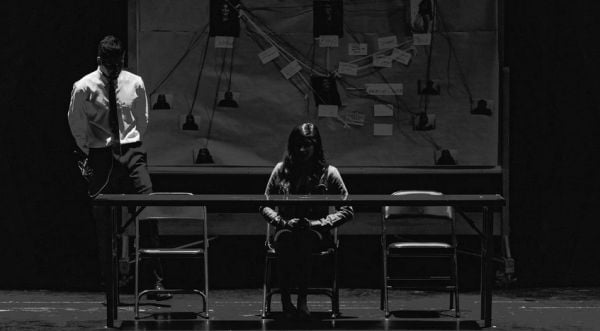 On September 11, 2001, nineteen al-Qaeda terrorists hijacked four planes and crashed them into the twin towers of the World Trade Center, the Pentagon, and a field in rural Pennsylvania, irrevocably altering the course of human events.

9/11 ushered in the United States' 'War on Terror'. To fight this global conflict, the George W. Bush administration allowed the use of "enhanced interrogation techniques" – torture – by the Central Intelligence Agency and various components of the armed forces. Methods like beating, binding in contorted positions, subjection to deafening noise, sleep deprivation, waterboarding, sexual humiliation, exposure to extreme heat or extreme cold, and confinement in small coffin-like boxes became part of U.S. government interrogations in order to extract information that would prevent future terrorist attacks and keep Americans safe.

At the time, Mark Fallon, the Deputy Commander and Special Agent in Charge of a Department of Defense task force that developed strategy, policies, and training programs and oversaw thousands of interrogations of terrorist suspects, argued against the use of torture. As he wrote in a 2014 opinion piece published in the Journal of Applied Cognitive Psychology:

My experience led me to conclude that resorting to abusive techniques was—aside from the legal and ethical problems—likely to greatly increase the chance of extracting inaccurate and unreliable information... From my perspective, the reasons for this are commonsensical. Especially in a counterterrorism context, by using cruelty, the interrogator lives down to expectations of the suspect, confirms the narrative that may have been used to recruit them, and hardens his resolve. However, rapport-based interrogation defies those expectations and opens up a channel for potential communication.

More than twenty years later, we now know that Fallon was correct. The Senate Intelligence Committee report on CIA torture, completed in 2014, concluded that “The CIA's use of its enhanced interrogation techniques was not an effective means of acquiring intelligence or gaining cooperation from detainees.”

Significant scientific research has also been conducted to find interrogation techniques that actually work. Much of this effort was spurred by the very public failure of  "enhanced interrogation techniques", but also from a growing realization that interrogations by American police had been understudied for decades. Moreover, commonly-used methods had produced many notable false confessions, leading to wrongful convictions. These misleading, abusive techniques include 12+ hour interrogations, misuse of polygraph machines, outright lying to subjects, and falsely promising leniency.

In 2009, the Obama administration established the High-Value Detainee Interrogation Group (HIG), a partnership of the CIA, FBI, and DoD, to question terrorist suspects. A key part of the program was researching the effectiveness of interrogation techniques, the results of which could be used to aid all law enforcement professionals. Psychologists Christian A. Meissner, Frances Surmon-Bohr, Simon Oleszkiewicz, and Laurence Alison reviewed the results of the program in 2017, summarizing the more than 120 peer-reviewed studies which had been completed and recommending evidence-based interrogation strategies going forward.

First and foremost, they criticized the commonly-utilized Reid Technique of interrogation, an accusatorial method frequently utilized by police. As described by journalist Douglas Starr in Science Magazine, the Reid Technique "starts with a behavioral assessment, in which the officer asks questions—some irrelevant and some provocative—while watching for signs of deception, such as looking away, slouching, or crossing the arms. If the suspect is thought to be lying, the investigator moves on to phase two, the formal interrogation. Now, they amp up the questioning—repeatedly accusing the suspect, insisting on hearing details, and ignoring all denials. Meanwhile, the investigator offers sympathy and understanding, minimizing the moral (but not legal) dimension of the crime and easing the path to confession."

Saul Kassin, a Distinguished Professor of Psychology at John Jay College of Criminal Justice in New York City, has conducted numerous studies over the years showing that the Reid Technique can easily lead to false confessions and frequently derives bad information from suspects, who end up simply telling officers what they want to hear or just making things up in order to end the interrogation. Moreover, Kassin found that police investigators are no better than novices at ferreting out deception and lying, even though they expressed more confidence in their lie-detecting abilities.

So if accusation and torture don't extract useful information from detainees, what does work? Meissner, Surmon-Bohr, Oleszkiewicz, and Alison turned up numerous effective methods from the HIG research. Building a rapport with the suspect seemed to be the most successful. This involves being patient, showing kindness and respect, and developing common ground. Humans are social creatures prone to cooperation. Friendliness brings out this evolved tendency.

Priming suspects' self-worth through compliments and invoking feelings of attachment also seemed to facilitate the disclosure of sensitive or embarrassing information. "Having a positive impact on the suspect’s behavior ultimately led to increased disclosure of relevant information," they wrote.

The authors also recommend setting suspects at ease and getting them talking about the potential crime in question, then strategically introducing evidence and information to see if they fit their narrative to what's been presented. Evidence can later be introduced to challenge suspects on potential inconsistencies in their statements.

"This technique allows truth-tellers to draw from their memory when providing an account, while leaving liars with fewer cognitive resources with which to conceal their deception," the authors wrote. "Tactics for imposing cognitive load include asking the subject to repeat their narrative in reverse order, instructing them to maintain eye-contact with the interviewer, and using forced turn-taking when multiple suspects are interviewed together."

The High-Value Detainee Interrogation Group Research Program elucidated plenty more evidence-based interrogation methods, which psychologists and trainers are now actively working to disseminate. Meissner and his collaborators are encouraged by the progress thats's been made.

"A science-based model of interrogation is beginning to replace outdated, ineffective, and problematic methods that have traditionally pervaded interrogation training schools."