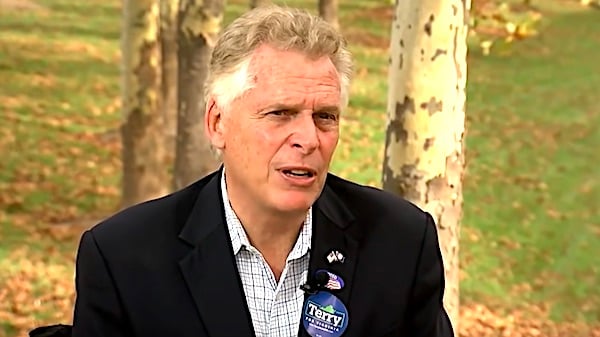 "The Democrat's advertisements, which have been viewed up to 3.5 million times so far, are hidden on a Facebook page with a similar name to a local news website," the report says. "The ads link to third-party websites that ostensibly publish local news, but exist to promote Democratic candidates. The websites have been widely described as disinformation and 'partisan propaganda.'"

McAuliffe is locked in tight battle for the governor's race, with a week away, with Republican Glenn Youngkin.
The Fox report called the McAuliffe ads "sophisticated and opaque."

McAuliffe operates a Facebook page under his own name to promote his campaign. But the former governor also operates another Facebook page that blurs the lines between a political campaign and disinformation.

"The page is called 'The Download Virginia,' and it was quietly launched by McAuliffe in June. While the name of the page sounds similar to that of a news organization, the page has not published any posts or photos, and only 67 people have 'liked' the page (a term Facebook uses to describe followers)."

Instead, most voters who have encountered "The Download" have done so through paid advertising. The ads do not appear on the page itself but can be obtained through a Facebook Ad Library Report, a tool used by journalists and researchers. The McAuliffe campaign has spent $471,044 on ads distributed by this page since June.

"The advertisements generally contain a comment and a link to a mainstream news article that covers the campaign favorably. But sprinkled among the links to legitimate media are seven separate advertisements (and dozens of variations) that promote websites widely considered to be 'fake news.'"

WND Staff
WND news editors compile reports for our readers.
This Biden administration gaffe may have broken the law
Biden bill would give amnesty to 6.5 million illegal immigrants
Teacher boasts of teaching her 'queerness' to 1st-graders
Woman triggers terror attack on Israel, now wants compensation for injuries
Limbaugh's producer goes public with Rush story he's never told
See more...
IMPORTANT NOTE TO WND COMMENTERS: Due to threatened Big Tech de-monetization, we have temporarily removed commenting while we take a week or two to enable our tech team to build a long-term commenting solution that will allow you to continue to voice your opinions freely, while also allowing us to continue to publish the news fearlessly and cover topics of vital importance to our nation. So stay tuned. Commenting will be back – soon. In the meantime, if you would like to partner with WND to help us continue publishing while under relentless assault by Big Tech, please visit our WND Insider page for an ad-free reading experience, and also consider donating to the nonprofit WND News Center. Thanks for your loyalty and understanding.