It is hard to imagine a teacher anywhere who embodies those values more courageously than seventh and ninth grade history teacher Angela Bittinger.

As Angela has proved through her ordeal, however, what sounded good on paper to school administrators does not hold much appeal for them in real life.

On Tuesday, Angela faced still another administrative hearing in what she described to me as an ongoing "witch hunt." The district seems to have no larger goal than to make Angela go away.

The challenge for administrators is to find a cause. In a Trump-friendly area like this, they might feel squeamish about listing Angela's real crime – openly questioning progressive orthodoxy.

A registered Democrat who confesses to having voted for Barack Obama, Angela has grown increasingly wary of our own government's creeping intrusiveness.

In class, she consciously strives to avoid indoctrinating her students and is convinced they have no idea of her own political preferences.

What she has tried to instill in them is a willingness to question authority, to look at an issue from all sides before making judgments. In too many public schools today, Pine Valley included, such curiosity is verboten.

Angela learned this the hard way after a class discussion on internet censorship in China got back to school administrators. According to Angela, they put her on administrative leave and launched an investigation.

As part of the investigation, a fellow teacher was coerced into handing over her cellphone. Investigators proceeded to review the texts between Angela and this teacher.

They then interviewed students without notifying their parents. "The students had only wonderful things to say," said Angela. The students likely saved her job.

At the subsequent hearing, the district's lawyer had the text messages printed out and questioned Angela on their meaning. "It was a huge invasion of privacy," said Angela. She found herself thinking, "Am I in '1984' or what?" 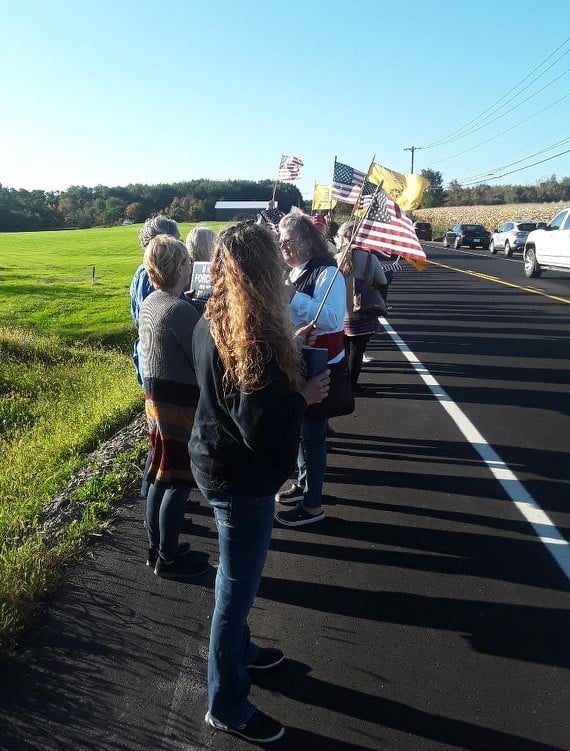 Not finding due cause to punish Angela beyond putting a counseling memo in her file, the district put her "under surveillance." What triggered Tuesday's hearing was her take on vaccines.

Having come down with COVID-19 in May 2021, Angela has followed the science on the relative strength of natural immunity and refused vaccination.

More troubling for the district, Angela has shared the science with the students and encouraged them to consult with their parents and physicians before taking the jab.

During the Tuesday hearing, the district attorney grilled Angela relentlessly on what she may or may not have told students about COVID, including an unwittingly ironic question on whether she presented both sides of the issue.

In truth, Angela was being hounded precisely because she did present both sides of the issue. In public education today, even in Trump country, this is taboo on any number of issues, even scientific issues from COVID to climate change to Darwinism.

Having spoken with Angela, I suspect she is better informed than any of her peers or superiors, but at Pine Valley, as throughout America's schoolhouse archipelago, knowledge is not power. Knowledge is a threat to power.

"Nobody has my back at school," said Angela. Those teachers not fully on board the woke express are fearful of those who are.

The average salary for a teacher in the state of New York is $80,000. In an economically depressed are like Chautauqua County, it doesn't get much better. Few teachers are willing to risk their livelihoods to preserve their liberty.

A single mother of four, Angela Bittinger is putting it all on the line: "We have to take back the freedoms that are being taken from us," said Angela. "If not now, when?"

As it happens, a novel of mine was published in the year 2000, titled, "2006: The Chautauqua Rising." Set just a few years in the future, the novel told the story of a grassroots uprising in the county triggered by a government crackdown on educational freedom.

In talking to the citizens who had come to the hearing to support Angela, I got a sense that this may be a case of life imitating art.

Jack Cashill
Jack Cashill has a Ph.D. from Purdue University in American studies. His lastest book is "Unmasking Obama."
The rot at DOJ runs deep
Trump's Solomonic win-win in Missouri
Why is Derek Chauvin in prison and Lila Morris is not?
How Trump conquered the Jersey Shore
The ongoing mob 'justice' against Derek Chauvin
See more...