Amidst the crises of the current administration – the border catastrophe, the disastrous withdrawal from Afghanistan, the vaccine mandates that are decimating the ranks of educators and health professionals, the massive supply chain shortages – at least we can depend on one comforting and unchanging standard: the progressive desire to create Utopia.

The article begins: "Former Walmart executive and e-commerce billionaire Marc Lore wants to build the world's first woke city from scratch – somewhere in the U.S. Lore last week unveiled plans for his utopia, called Telosa, from the ancient Greek word Telos, meaning 'highest purpose.' 'The mission of Telosa is to create a more equitable, sustainable future. That's our North Star,' Lore said in a promotional video. 'We are going to be the most open, the most fair and the most inclusive city in the world.'"

There you go. Because regular cities aren't "woke" enough, this guy will build his own. Lore says the city is meant to "take on" what he views as America's biggest challenge: the rapidly growing wealth gap, which he says "is going to bring down America." I find this a touch ironic coming from a billionaire whose wealth was built on poor people taking advantage of cheap Walmart prices, but whatever.

Telosa isn't going to be a hippy commune, either, but a proper city complete with massive skyscrapers, a full public transportation system, shopping enclaves and projected future housing for upwards of a million people (perhaps as many as 5 million within 40 years). 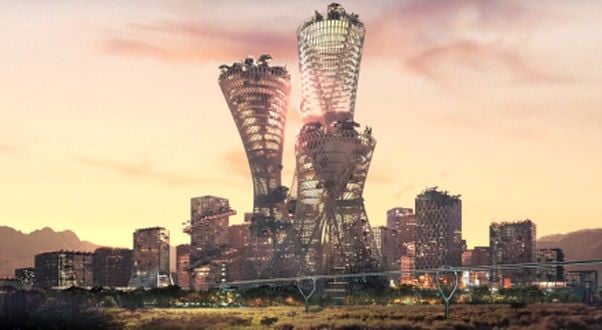 According to the website, Lore's mission statement for the city of Telosa is to "create a more equitable and sustainable future" that can "become a blueprint of future generations." The initial phase of the project is targeted for completion by 2030 with an estimated population of 50,000 people on 1,500 acres. Eventually the design calls for expanding to 150,000 acres with room for 5 million people. Amenities will include eco-friendly architecture, sustainable energy production and a drought-resistant water system.

The project's planners have yet to commit to a location, but the website identifies Nevada, Utah, Idaho, Arizona, Texas and the Appalachian region as possible sites. (There is no mention about the fate of people who will be displaced to make room for this city. Just saying.)

As with all attempts to create Utopia, the city of Telosa will sport every progressive agenda imaginable: It will be open, fair and inclusive. Fresh water will be stored, cleaned and reused on site. The city will be powered by renewable resources. Autonomous cars will create safe, flexible streetscapes. Citizens will be provided with "honest and clear financials" (whatever that means). The environment always will be a priority. Citizens will be informed and politicians accountable. Every student will have access to the best teachers and resources. Quality training programs will prepare people for jobs of today and the future. There will be easy access to personalized health care. Diverse housing options will be accessible to all. Nature and safe public spaces will bring people together. And people will be able to easily access needs within a 15-minute commute, and the streets will prioritize bikes and pedestrians. Isn't this nice?

"Imagine living in a city with an economic system in which citizens have a stake in the land; as the city does better, the residents do better," proclaims the website. "We call this Equitism."

What's never made clear in this, or any other Utopian scheme, is the following: Who does the dirty work? Who constructs the skyscrapers? Who builds the road system? Who collects the garbage? Who cleans the toilets? Who maintains the landscaping? Who grows and transports the food? Who manufactures the steel? Who mines the ore to manufacture the steel? Who is logging the timber, smelting the metals, laying the sewer pipes, constructing the homes, wiring the buildings, paving the streets, extruding the recycled plastics for creating the recycling and compost bins, and otherwise building this Utopian city? How far down this rabbit hole do you want to go?

I don't know why, but I always find it fascinating when Very Rich People think they can build their own version of Utopia. Of course, I'm guessing the only people allowed to become residents of this city are those whose visions, suasions and attitudes match those of Mr. Lore. I doubt it will permit private firearms ownership or feature a lot of Bible-believing churches. Can't have freedom of thought in Utopia! Must! Conform!

The ugly truth of the matter is "Utopian" schemes are always – always – built on the backs of the invisible people who do the dirty work. Meanwhile the virtue-signaling progressives sit in their nice air-conditioned offices typing away at their nice modern computers (which are manufactured overseas under questionable conditions) while congratulating themselves on how virtuous and progressive they are. Since many times those invisible people live far away, out of sight and out of mind (and apparently out of conscience), the farce of Utopia can be promulgated.

But the dirty details won't stop virtue-signalers from virtue signaling. "We have a chance to prove a new model for society that offers people a higher quality of life and greater opportunity," Lore said in a statement. "When I look out 30 years from now, I imagine Equitism serving as a blueprint for other cities – and even the world – and Telosa being a place of pride for all who live there." Gosh, that makes me feel all warm and fuzzy inside.

Having spent the last 900 words trashing the notion of Utopian cities, let me now say I can understand the impulse. All one has to do is consider the dystopian hellholes so many modern cities have become (NYC, Portland, Seattle, San Fran, L.A., etc.) to appreciate the desire to create an urban center free of those vices.

But it's not the cities per se. It's the progressive policies implemented by generations of progressive city leaders that doom the inhabitants and turn them into the dystopian hellholes we're seeing today. History has shown Utopia will never be Built Back Better through progressive ideals.