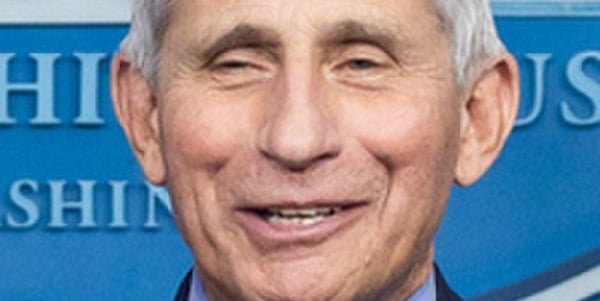 Dr. Anthony Fauci says his view of wearing a mask in public has evolved with "the science" since he declared on "60 Minutes" early in the pandemic that people shouldn't go around town wearing them.

But judging by his actions, his latest assessment of "the science" appears to be that people need to wear a mask only around those they don't trust.

Politico, citing Washington Post writer and author Sally Quinn, reported Fauci was at a book party last Tuesday night for Jonathan Karl where the White House coronavirus adviser was taking his mask off and on depending on whom he was around.

Quinn, who was married to famed Post editor Ben Bradlee until his death, has known Fauci since he was a young NIH doctor. She asked him why he holding his mask at the party, where guests had to show proof of vaccination.

"I said, 'You seem pretty ambivalent about your mask' because no one else was wearing one," Quinn told Politico's Playbook.

"He said, 'I just decided that if anyone came up that I didn’t know, I would put my mask on.'"

Quinn said there were "paparazzi" around Fauci trying to catch him without a mask on.

"He was being safe," Quinn said in Fauci's defense.

"He knew everyone was vaccinated. If it was someone we knew, he would trust them, and if it was somebody else, he didn't."

In a March 2020 interview with "60 Minutes," Fauci warned of "unintended consequences," saying there's "no reason to be walking around with a mask" in "the middle of an outbreak."

The World Health Organization at the time recommended people not wear face masks unless they are sick with COVID-19 or caring for someone who is sick.

In March 2020, the U.S. Centers for Disease Control also said masks "are usually not recommended" in "non-health care settings."

Fauci and others later argued the science had evolved. However, a study earlier this year by the University of Louisville was among many that found that state mask mandates did not help slow the spread of COVID-19. A CDC study in October 2020 indicated that Americans were adhering to mask mandates, but the requirements didn't appear to have slowed or stopped the spread of the coronavirus. And further, it found, mask-wearing has negative effects. The Association of American Physicians and Surgeons has compiled a page of "Mask Facts" showing that the consensus prior to the coronavirus pandemic was that the effectiveness of mask-wearing by the general public in slowing the spread of a virus is unproven, and there's evidence it does more harm than good.

An analysis published in Nature magazine found that N95 masks do offer some protection from airborne viral diseases, but the common surgical mask, which has holes bigger than the SARS-CoV-2 virus, loses any efficacy after about 20 minutes because of the buildup of vapor from breathing.

How do these people function in life 🤦‍♀️ pic.twitter.com/oWc4I4vsiD

Vice President Kamala Harris recently was captured on video pulling off her mask as she walked up to a crowd of supporters:

Can someone explain the science behind wearing a mask only to remove it while approaching a crowd of people?

Art Moore
Art Moore, co-author of the best-selling book "See Something, Say Nothing," entered the media world as a PR assistant for the Seattle Mariners and a correspondent covering pro and college sports for Associated Press Radio. He reported for a Chicago-area daily newspaper and was senior news writer for Christianity Today magazine and an editor for Worldwide Newsroom before joining WND shortly after 9/11. He earned a master's degree in communications from Wheaton College.
@@arthurdmoore
FDA knew 44% of pregnant women in Pfizer trial suffered miscarriages
'This is not doctored': See IRS recruit 'Police Academy'-style armed agents
Why is FBI withholding crucial video of Jan. 6 pipe bomber?
DHS-FBI brief casts conservatives as 'domestic violent extremists'
'There's no reason for these shots': CDC's case for vax mandates crumbles
See more...