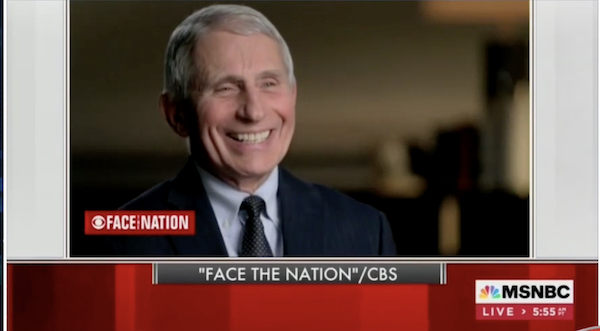 Reacting to Dr. Anthony Fauci's claim that he and his opinions represent science itself, feminist author Naomi Wolf warned the White House coronavirus adviser Monday that he should prepare his legal defense for the time when his "friends" in Congress are no longer in power.

Wolf, who is leading a grassroots movement claiming the pandemic lockdowns and vaccine mandates are only part of an accelerated move toward totalitarianism in the West, noted there are calls among Republican lawmakers for Fauci and Centers for Disease Control and Prevention Director Rochelle Walensky to be investigated for "willful misconduct" regarding their handling of the pandemic.

"I think these people realize that they are covering up a gigantic crime, and I think Dr. Fauci's response shows that he knows," Wolf said in an interview with Steve Bannon's "War Room."

She said that sooner or later, possibly after the midterms, "their friends might not be in charge and there will be investigations."

"And there will be subpoenas, and you are going to see emails that are now redacted. And a lot of people have died and a lot of information has been covered up," Wolf said.

"I think Dr. Fauci should be scared of an investigation. There is clearly misconduct going on."

A onetime political adviser to the presidential campaigns of Bill Clinton and Al Gore, Wolf said it seems that everyone has "lost sight of the fact that according to every law in every democracy you need full informed consent in order to agree to a medical intervention."

Bannon asked Wolf to react to Fauci's claim that he represents science and his critics are "anti-science," propagating lies and spin.

"On the contrary," she said, it's Fauci and Walensky who are "operating on the basis of cherry-picked data or theories that are debunked."

For example, she said, it's now common knowledge that the PCR tests used to determine whether or not someone is infected with COVID-19 can be easily manipulated to yield false-positives.

Wolf also cited a peer-reviewed paper by Dr. Henry Ealy of the non-profit Oregonians for Medical Freedom that presented evidence, she said, that "the CDC is cherry-picking data in a criminal way."

Ealy's group is calling for criminal investigations because 20 states have not even been reporting deaths and hospitalizations for vaccinated people to the CDC. Further, the CDC stopped counting at the end of October.

Wolf said it should be clear by now that it's a "myth" that lockdowns will stop the spread of the virus.

Sweden and Florida, she noted, "are now doing better than the most repressive lockdown states and countries."

Last week, Fauci charged in an MSNBC interview, that Fox News host Tucker Carlson and former Trump trade adviser Peter Navarro are "killing people" with "lies" about him and the pandemic.

"The praise or the arrows and slings are really irrelevant. I do what science drives you to do," he said.