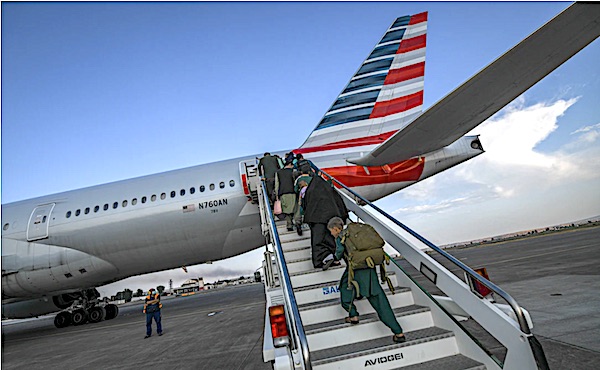 Former Afghan interpreter Ajmal Amani was shot dead in San Francisco before Thanksgiving after attacking police and several neighbors with a knife. What was he screaming? "Allahu Akbar!"

This was not the first time Amani was charged with assault. In 2019 Amani was arrested after allegedly slashing a city park ranger with a box cutter.

Remember box cutters? They were used to hijack commercial airliners on 9/11. At least this Afghan won't use one again.

Police on Wednesday released video of officers shooting a knife-wielding man who charged at them in a residential hotel.

Videos show Ajmal Amani charging at @SFPDSouthern officers at SoMa residential hotel while armed with knife, per @SFPD. @SFPDChief Bill Scott express condolences to family of Amani, who once served as Afghan interpreter for US military & had PTSD. https://t.co/8Bqhqnq2jn pic.twitter.com/T9GZ9CYNWV

Amani, 41, was shot Friday morning in the narrow corridor of the building on South of Market after threatening several people with a large kitchen knife. He was shot in the stomach and leg and died at a hospital.

Amani was a former Afghan interpreter for U.S. special forces who had been shot several times during more than five years of service and struggled with post-traumatic stress disorder, his former lawyer, his case manager and a property manager said.

He was also was charged with assault with a deadly weapon in 2019 for allegedly slashing a city park ranger with a box cutter who said he appeared to be in an "altered mental state."

Amani was ordered to undergo mental health treatment which he completed this year and was living in a city-rented room at the "residential hotel."

Police were called to the hotel on Friday morning by reports that a man was screaming and yelling and had a knife. Amani's case manager also called 911 to report that a co-worker said Amani was having "a really bad episode."

This story was barely covered be the press. Apparently San Francisco has too much news happening.