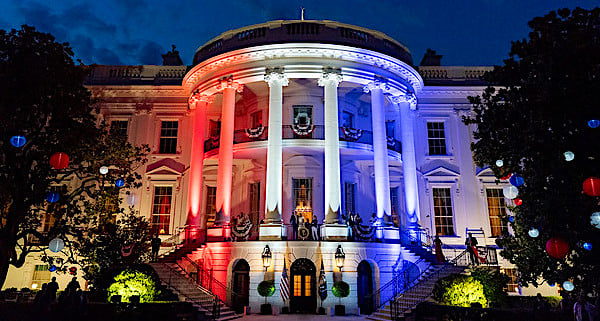 The South Portico of the White House is seen lit up in red, white and blue lights during the Fourth of July Celebration, Sunday, July 4, 2021, as President Joe Biden, First Lady Jill Biden and members of their family watch fireworks from the Blue Room Balcony. (Official White House photo by Erin Scott)

More than 20% of Americans said that “the government/poor leadership” is the top problem facing the country, more than twice the number of Americans that say the same for “the economy in general,” according to a Gallup survey. Additionally, concerns have eased about the COVID-19 pandemic, with the percentage saying it is the nation’s greatest problem dropping to 13% in November from 21% in September.

Meanwhile, Americans’ mentions of an economic issue grew to a pandemic-long high, with 26% of respondents mentioning specific economic issues as among the biggest problems facing the country. While 10% of Americans said the economy in general is the most significant issue the country faces, 7% cited inflation and the high cost of living and 5% pointed to unemployment and jobs.

The survey of 815 adults, which took place from Nov. 1-16 and has a four percent margin of error, found that 30% of Republicans and 29% of Independents mentioned economic issues when asked about the biggest problem facing the country, but it said that only 18% of Democrats did so.

November’s poll was the first of its kind since January 2017 to show a double-digit percentage of Americans saying the economy was the most significant problem in the country.

Inflation reached a 30-year high in October, with the Consumer Price Index growing 0.9% from the previous month and reaching 6.2% on a year-over-year measure. The Producer Price Index, which measures inflation at the wholesale level, rose 8.6% on a year-over-year basis as of early November, increasing at a record rate for the second straight month.