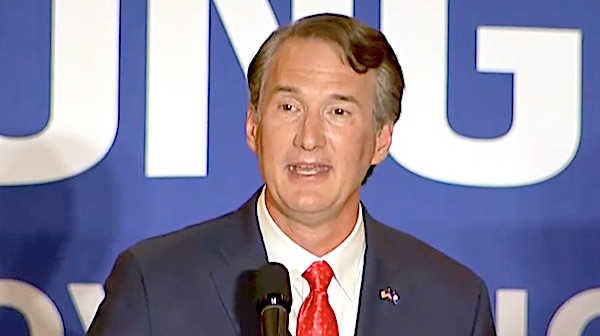 With concerned parents across the nation raising the issue before school boards, Youngkin "made fighting against Critical Race Theory and the systematic state-sanctioned abuse of Virginia school kids the centerpiece and the closing argument of his campaign."

In an interview with Fox News on Tuesday night, Rufo said Youngkin's win "showed that the lies from MSNBC, from the Washington Post and from the New York Times could not hide the simple truth that a strong majority of Virginia voters, including Republicans, independents and Democrats, reject the toxic politics of critical race theory and want to restore merit-based education oriented towards excellence."

He called it a "massive political loss for the liars and ideologues" in media and politics "who have attempted to blind the public, to what's happening within American institutions."

He hopes now to "take this model of victory," "replicate it in all 14,000 school districts" nationwide and "take back the institutions from the corrupt ideologues and bureaucrats that have had them for too long."

McAuliffe insisted CRT was not being taught in Virginia schools and he dismissed the concern about CRT as a racist "dog whistle" by a candidate trying to win over "white supremacist" supporters of Donald Trump.

The movement, however, not only crossed party lines, it drew parents of all races, who also happened to push over the top minority candidates. They included Jamaican immigrant Winsome Sears for lieutenant governor and Jason Miyares, the son of a Cuban immigrant, for attorney general, who called himself the first Latino elected statewide.

"In case you haven't noticed, I am black, and I have been black all my life," Sears said in her acceptance speech, before vowing that children in Virginia, under the new administration, "are going to get a good education."

I could watch this all day. Congratulations to @WinsomeSears.pic.twitter.com/BVOYGobWTP

Hey @JoyAnnReid, I heard your shameful comments. I’ll be patiently waiting for an invite to come on to your show to respond. Be well! 👍🏾 pic.twitter.com/KgzTDsm9Kg

A key figure in the school-board fight was a Muslim immigrant from India, Asra Nomani. A lifelong Democrat who voted for Biden, she formed a grass-roots activist group called Parents Defending Education.

"What the parents of Virginia have done is send a clear message to every single person who has treated us like dirt," she said in a live Fox News interview from Youngkin's headquarters Tuesday night.

"We are mama bears and papa bears, and we have said loud and clear, 'Get your hands off of our cubs. You are going to lose more races if you continue to treat us like dirt," she told Laura Ingraham.

"None of this nonsense is going to be acceptable anymore." @AsraNomani last night on the @IngrahamAngle pic.twitter.com/OKqm1x5SU3

The moment @GlennYoungkin clasps his hands in gratitude to you: mama bears—and papa bears. “Way to go mama bears!” he says. “You guys were awesome.” Then he recognizes a teen who had introduced him when he met @coalitionforTJ parents. We do this for America’s cubs 🐻 We see you. pic.twitter.com/melhkjiQ73

"I think the real ominous thing is that Critical Race Theory, which isn't real, turned the suburbs 15 points to the Trump insurrection-endorsed Republican. What can Democrats do about that?"

"But Republicans effectively used it (to) scare and outrage parents and turn out the vote," she said. "January 6th IS a real thing -- an act of domestic terrorism threatening our democracy, but Republicans want to pretend it didn’t happen."

However, the term itself shows up in communications from the Virginia Department of Education as a concept worthy of promotion. And two school districts in Northern Virginia hired the consulting firm Panorama, which specializes in Critical Race Theory training programs. More significantly, CRT's basic premises have been widely promoted in schools across the nation in the wake of the death of George Floyd in May 2020.

The protests that summer were based on the claim that America, including its policing, is systemically racist. This, despite government data and mainstream studies to the contrary and the admission of Minnesota Attorney General Keith Ellison that prosecutors found no evidence that the officers charged in the death of Floyd had a racial motivation.

In a Feb. 22, 2019, memo to school superintendents, Virginia's superintendent of public instruction, Ed Lane, provided a reading list that included "Foundations of Critical Race Theory in Education" and books contending white people are inherently racist and America has a white supremacist foundation that must be torn down.

On the Virginia Department of Education website is the outline of a presentation to the department in September 2015 -- when McAuliffe was governor -- urging educators to "incorporate" a "Critical Race Theory lens."

In his 2019 memo, the state superintendent, Lane, explained he had "received several inquiries and requests for the latest literature that examines the issues associated with racial inequities in education." The list contained books that he "and other members of the VDOE staff are reading this month based on recommendations that we have received."

"More recently, CRT has proven an important analytic tool in the field of education, offering critical perspectives on race, and the causes, consequences and manifestations of race, racism, inequity, and the dynamics of power and privilege in schooling."

Lane's description said "this landmark publication not only documents the progress to date of the CRT movement, it acts to further spur developments in education."

Other books Lane recommended include "White Fragility, by Robin DiAngelo, and "Between the World and Me," by Ta-Nehisi Coates.

DiAngelo, who is white, offers no serious solutions, essentially posing the paradox of contending the onus is on whites to fix America's racial problems while insisting whites are irredeemably racist.

Among her many black critics, points out New York Post columnist Maureen Callahan, is Columbia professor John McWhorter, who wrote in an article in The Atlantic stating DiAngelo "openly infantilized black people" in her book. He said on NPR that DiAngelo, who has become wealthy lecturing on her theories, offers an "Orwellian indoctrination program" that "is racist."

Washington Post book critic Carlos Lozada, who hails from Peru, said "White Fragility" is a "self-serving" book that present "circular logic ... nothing ever changes, because change would violate its premise."

The description of Coates' book "Between the World and Me" in Lane's memo states: "Americans have built an empire on the idea of 'race,' a falsehood that damages us all but falls most heavily on the bodies of black women and men — bodies exploited through slavery and segregation, and, today, threatened, locked up, and murdered out of all proportion."

Coates contends racial progress is a lie, rejecting "the common theory that emancipation and civil rights were redemptive" and any notion that past debts have been paid.

Whites can never escape their whiteness, and retribution rather than reconciliation is the only answer, he asserts. He writes that the "(American) Dream of acting white, of talking white, of being white ... murders black people in Chicago with frightening regularity."

At the conclusion of an article in The Atlantic titled "Why Do So Few Blacks Study the Civil War?," Coates expresses impatience with a passive approach to change.

"White Americans finding easy comfort in nonviolence and the radical love of the civil rights movement must reckon with the unsettling fact that black people in this country achieved the rudiments of their freedom through the killing of whites."

Partnering with Black Lives Matter
In July, the nation's largest teacher's union, the National Education Association, pledged to educate members in all 50 states who "want to learn more and fight back against anti-CRT rhetoric."

The NEA's plan will provide a "study that critiques empire, white supremacy, anti-Blackness, anti-Indigeneity, racism, patriarchy, cisheteropatriarchy, capitalism, ableism, anthropocentrism, and other forms of power and oppression at the intersections of our society, and that we oppose attempts to ban critical race theory and/or The 1619 Project."

The New York Times "1619 Project," which is being implemented in public schools, contends that America was founded on slavery and is irredeemably racist.

In April, the U.S. Department of Education proposed a new regulation under American History and Civics Education programs that would give preference to grant applications for curricula that incorporate the 1619 Project and the ideas of radical "antiracist" scholars such as Ibram X. Kendi.

Kendi, last weekend, unintentionally undermined his "white privilege" worldview, retweeting a report on a survey that found one-third of white people falsely claimed on college admissions applications to be a minority.

The head of another major teachers union, Randi Weingarten of the American Federation of Teachers, has vowed to defend educators who implement CRT in classrooms.

Weingarten made a campaign appearance with McAuliffe on Monday night, the final night of the campaign.

Democrats need to 'find a way to talk about it'
During MSNBC's election coverage Tuesday night, a contributor who lives in Virginia noted a significant swing in the vote of suburban mothers with children in schools.

"Because it's a problem that hurt them last night, so they have to find a way."

A month ago, a neighbor of hers who had a Biden sign switched to a Youngkin sign.

"That was the moment I knew things were changing."