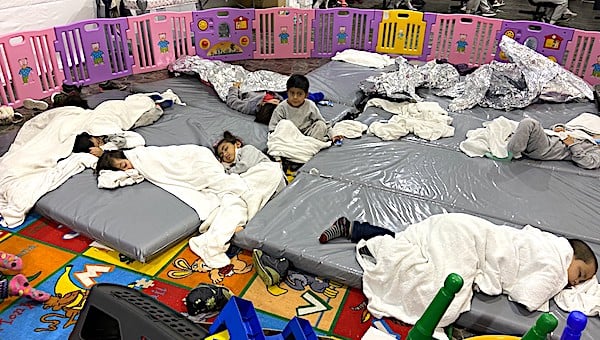 A new report from the Center for Immigration Studies estimates that Joe Biden's still-in-progress reconciliation plan would give some $10.5 billion of Americans' tax dollars to illegal aliens with children in the United States.

And in some cases, the cash payments would be more than those immigrants could earn in a year in their home country, providing a massive reason for more to come.

Steven Camarota of the CIS wrote in a commentary at Real Clear Politics that Biden's reconciliation proposal is estimated to end up paying "A total of $10.5 billion in cash payments to illegal immigrant parents."

"These payments are not related to the huge cash settlements the administration is planning to pay illegal immigrant families separated at the border during the Trump administration," he explained, citing the reported plans for at least another billion dollars in giveaways.

"These payments represent an enormous inducement to illegal immigration. We estimate that 78% of illegal immigrants with children have income low enough to receive cash payments averaging $5,300 per family, or about $2,600 per child next year. To place these numbers in perspective, the median income in the current top illegal immigrant-sending countries of Honduras, Guatemala, and El Salvador is $3,000 to $4,000 a year. The cash payment we are offering to virtually anyone who arrives with a child, whether they work in the United States or not, is roughly equal to — or in some cases exceeds — what migrants could earn in their home countries in one year," he explained.

Camarota, director of research at the CIS, said, "The budget reconciliation package pushed by Democrats creates a new expanded child tax credit (CTC) that would pay illegal immigrants some $10.5 billion next year. All immigrants with children are eligible, regardless of how they got here and whether their children are U.S.-born. This includes the roughly 600,000 unaccompanied minors and persons in family units stopped at the border in FY2021 and released into the country pending a hearing. Cash welfare to illegal immigrants is not just costly; it also encourages more illegal immigration."

He cited the details: "Although it is referred to as a 'refundable credit,' the new CTC, like the old additional child tax credit (ACTC) it replaces, pays cash to low-income families who do not pay any federal income tax. The new program significantly increases the maximum cash payment from $1,400 per child to $3,600 for children under 6, and to $3,000 for children ages 6 to 17. After 2022, the maximum payment would be $2,000 per child, but advocates hope the much larger payments will be extended."

He explained he and his colleague, Karen Zeigler, earlier had estimated a cost to U.S. taxpayers for illegal aliens of $8.2 billion, but that assumed the program would require children to have Social Security numbers.

But the reconciliation plan removes that requirement, result in the new, and higher, estimate of costs.

"The permanent elimination of the SSN requirement means that even illegal immigrants whose children are also illegally in the country can receive the new expanded credit," he explained.

And he warned, "In addition to creating large costs for taxpayers and encouraging illegal immigration, the elimination of the SSN requirement would seem to be an invitation to fraud, as tax filers now simply need to provide a name and date of birth for a child. The only other requirement is that they check a box on their returns indicating they lived in the United States for half a year, though there is no enforcement mechanism for this provision."

He pointed out that most illegal aliens in America do, in fact, work.

"But the welfare benefits we give to them certainly incentivizes even more illegal immigration. … If we want to understand why a record 1.7 million people were apprehended at the border in FY 2021, we need to look no further than the large cash payments the House plans to give illegal immigrants."