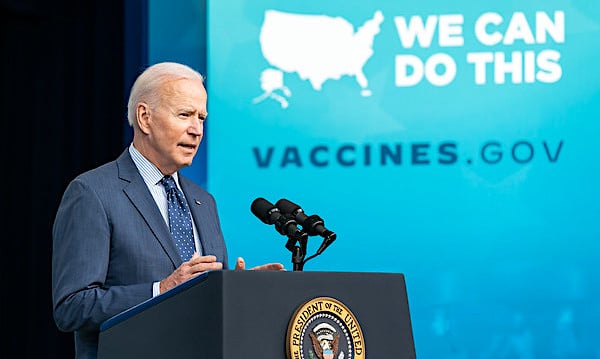 The same fate is being imposed on America’s police, its firemen, its border patrol agents and other key protectors and defenders of civilized society; its airline pilots, air-traffic controllers, plane mechanics and others essential to America’s transportation and distribution systems; plus all federal government employees, multitudes of teachers and college students, and all employees of private companies employing more than 100 people – all ordered by Joe Biden to “GET VACCINATED” or else. Then there are the forced vaccinations for the entire Armed Forces of the United States, populated largely by young people at an age and fitness level that render serious COVID-19 outcomes extremely rare. Indeed, as of Oct. 8, only 62 out of 1.4 million members of America’s military – approximately 0.004% – had died of COVID.

In reality, what the Biden administration has put into motion resembles a monumental game of “Chicken” between the “government-medical complex” and tens of millions of Americans who simply choose not to be vaccinated. It’s a harrowing, death-defying contest to see which will happen first: Either millions give in and allow their bodies to be injected with the controversial experimental medicines, or the entire nation loses as many as a quarter of its most essential workers who are forbidden from working, causing the nation to grind to a halt – crippling everything from law enforcement to airlines to commercial supply chains, even hospitals. The shutdowns are already happening – from an obstetric hospital wing in New York to a neonatal intensive care unit in Maine to nursing homes announcing their imminent closure.

Incredibly, the Biden administration is mandating that those who have already recovered from COVID-19 – estimated by the CDC to be over 100 million Americans – be vaccinated. This despite the undisputed fact that, as 92 studies prove, the COVID-recovered possess “natural immunity” far superior in every way – more robust, longer lasting and broader (i.e., effective on new variants like delta) than that conferred by any existing COVID vaccine.

Moreover, while the COVID recovered possess superb immunity against future infection, they also face a 4.4 times greater likelihood of suffering adverse effects from receiving the mRNA shots than do those who haven’t previously had COVID. So, while reaping zero benefit from the vaccine, they face a far higher than average risk of bodily harm from the shot they don’t need or want. And yet, the Biden administration is manically forcing them to take it anyway – or lose their livelihood.

Of course, in response the Biden administration is doing what it always does to its political and ideological opponents: It brands them as terrorists.

A "national terrorism alert" released by Biden’s Department of Homeland Security in September, shortly before the 20th anniversary of the 9-11 attacks, is titled "POTENTIAL TERROR THREATS."

DHS specifies three terror threats as particularly worrisome to the Biden administration, but the top threat cited is: "OPPOSITION TO COVID MEASURES."

Meanwhile, as the whole vaccine mandate drama is wracking the nation, yet another front in the Biden administration’s new “war on terror” has emerged: Parents, upset that their own children, who face virtually no threat from COVID-19, are forced to wear masks all day while being brainwashed with “critical race theory,” transgenderism and other toxic ideologies, are fighting back. At school board meetings across the country, courageous mothers and fathers are defending their children and excoriating school board members for promoting Marxist poison in the schools the parents are forced to pay for.

Just as the Biden administration characterizes those who cried foul after the fraud-plagued November 2020 election as insurrectionists and white supremacist terrorists, it has now enlarged the “violent extremist” dragnet to include nurses and pilots who choose not to receive the experimental COVID vaccines, as well as parents protesting schools traumatizing and brainwashing their kids.

Fortunately, growing multitudes of decent, patriotic and God-fearing Americans are courageously standing up, speaking out, and nonviolently fighting back – hard – for their livelihoods, for their families, and for the country they love. Last Tuesday's election was just the beginning.

IMPORTANT NOTE: Joe Biden’s tyrannical mandate threatens to cripple American society – from law enforcement to airlines to commercial supply chains to hospitals. It’s already happening. But the good news is that huge numbers of “yesterday’s heroes” are now fighting back. The whole epic showdown is laid out as never before in a special issue of WND’s acclaimed monthly Whistleblower magazine, titled “THE GREAT AMERICAN REBELLION: ‘We will not comply!’ COVID-19 power grab ignites bold new era of national defiance.”