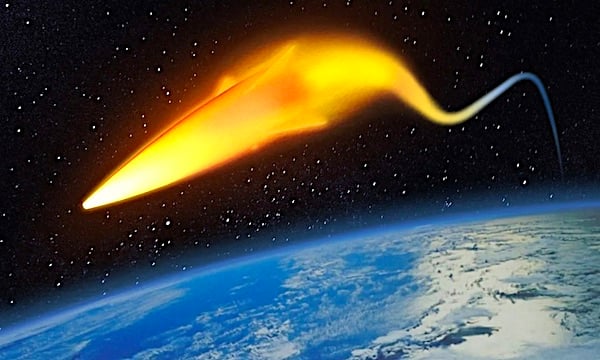 A senior U.S. Space Force officer is warning that China's apparent ability to put a hypersonic weapon into orbit vastly increases the threat of such a weapon, a new report reveals.

That's because the direction from which an attack could come, and when it could come, would be completely unpredictable.

That's unlike traditional ballistic missiles which can be tracked closely.

The report in The Drive explains Space Force Lt. Gen. Chance Saltzman, the deputy chief of space operations for Operations, Cyber and Nuclear, said the new China weapon appears to be some sort of hypersonic glider that may even be capable of launching its own projectiles.

Saltzman discussed the issue in an online event held by the Air Force Association's Mitchell Institute this week.

He said the definitions of the terms are important, such as hypersonic and suborbital orbit.

Hypersonic traditionally refers to speeds beyond Mach 5, and suborbital involves objects that may reach into space, beyond the atmosphere, but do not enter into an actual orbit.

"This is a categorically different system, because a fractional orbit is different than suborbital," he said. "A fractional orbit means it can stay on orbit as long as the user determines and then it de-orbits it as a part of the flight path."

His explanation suggests that such a weapon could orbit – and then be deployed on orders.

In an interview with CBS earlier, retired Air Force Gen. John Hyten, who recently was vice chairman of the Joint Chiefs of Staff, said of China's craft, "It went around the world, dropped off a hypersonic glide vehicle that glided all the way back to China, that impacted a target in China."

The Financial Times shortly later released a report that China's vehicle, during a test, released a projectile, although it remains unclear exactly what that was.

Back during the Cold War, the Soviets "are known to have developed and deployed to a limited extent during the Cold War " "an ICBM-like missile that would put a more traditional re-entry vehicle containing a nuclear warhead into orbit. That warhead could then be de-orbited in a controlled manner to strike a target," the report explained.

The advantages are that a lower flight orbit is harder to track, and such a process has "the ability to hold any target within a strip of geography along the orbit at risk, presenting challenges to an opponent's early warning networks and their ability to anticipate where and when a strike might occur," it said.

The Drive explained, "From everything that we know so far about China's system, it uses some kind of hypersonic glider capable of high-speed, largely level, atmospheric flight and that has at some degree of maneuverability, rather than a typical re-entry vehicle. This, at least in principle, would blend the defense-evading benefits of a FOBS with those of a hypersonic boost-glide vehicle. Financial Times' report that the vehicle in this new Chinese system may be able to release projectiles itself, a technically complex capability for anything moving a hypersonic speed, would only present more challenges for a defender."

One issue is that if a weapon is in orbit, it would fall under the Outer Space Treaty of 1967 which bans the permanent stationing of nuclear weapons in orbit, the report said.

Still, the details of China's operations remain unclear, so that exact threat cannot be determined.

Saltzman said the work continues. "A lot of our warning, you know, is based on ballistic missiles because that’s the been the primary threat for so many years," he said. "And so it’s incumbent on the Space Force, in my mind, to make sure that we’re developing the capabilities to track these kinds of weapons. Before they’re launched, ideally, but then throughout their lifecycle – either on orbit or in execution of their mission set."