The federal government has announced it has killed its immediate plans to implement "emergency" work-safety rules that would require employees across the nation to accept the experimental COVID-19 mRNA treatments or other shots aimed at COVID-19.

A statement from the Occupational Safety and Health Administration said: "On November 12, 2021, the U.S. Court of Appeals for the Fifth Circuit granted a motion to stay OSHA's COVID-19 vaccination and testing emergency temporary standard … The court ordered that OSHA 'take no steps to implement or enforce' the tests 'until further court order.' While OSHA remains confident in its authority to protect workers in emergencies, OSHA has suspended activities related to the implementation and enforcement of the ETS…"

The mandate would have required employees of companies that have 100 or more employees to take the shots, which have been characterized as mRNA treatments, and not real "vaccines." While promoters say they are essential to prevent COVID-19 surges, there also have been thousands of deaths from bad reactions to the shots.

The Biden administration's agenda also had been revealed to be contemplating when it could order employees of companies with fewer than 100 workers to do the same. 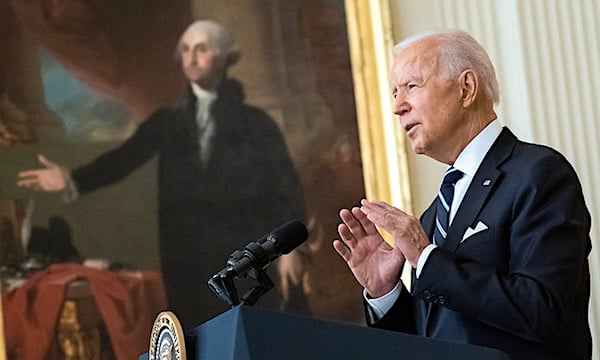 But the move already had drawn a long list of lawsuits challenging Biden's authority to dictate health care decisions for millions of Americans.

The National Law Review explained OSHA's proposed Emergency Temporary Standard for "COVID-19 vaccination and testing requirements" was targeted in lawsuits by states and businesses both.

The 5th Circuit's decision on Nov. 6 was a "very short" ruling that stayed the implementation of Biden's agenda.

"Then, on November 12, 2021 the Fifth Circuit entered a long opinion in which it has issued a preliminary stay of the law," the report said.

#BREAKING: OSHA announces it will comply with the 5th Circuit's court order. The agency says it has suspended implementation and enforcement of its vaccine mandate. pic.twitter.com/pCZDZjeqwB

The report explained, "In doing so, the court signaled in the strongest of possible terms that it was poised to find that the rule does exceed OSHA‘s statutory authority in several ways and is unconstitutional."

So the "administration declared yesterday that OSHA has suspended all activities relating to the implementation and enforcement of the ETS pending further litigation. However, this is still a temporary ruling and will be appealed, most likely all the way to the Supreme Court, which would make the final decision," the report said.

Specifically, the report said, "Although not expressly stated, this means that employers under the rule have a reprieve of the upcoming December 5, 2021 deadline, and likely the January 4, 2022 deadline as well, as the courts will take some time to provide much-needed clarity and a final decision."

Besides the legal challenges, the Florida legislature already had begun meeting in a special session to address a state action that would block OSHA's plan.

The developments followed a decision that the legal fights against Biden's agenda would be consolidated and considered by the U.S. 6th Circuit Court of Appeals, "a panel dominated by judges appointed by Republicans," a report at KFYR Television explained.

The Cincinnati-based court was selected in a random drawing, a process used when multiple courts are facing challenges to the same federal actions.

A total of 27 states and many, many employers and business organizations had challenged Biden's actions in court.