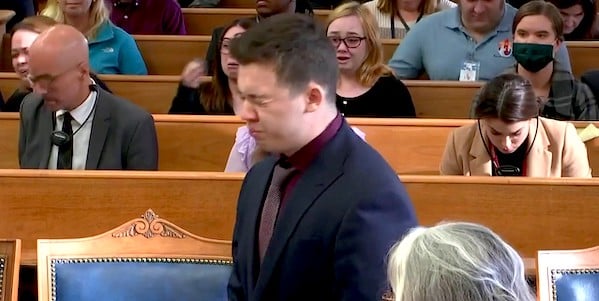 Kyle Rittenhouse reacts to being declared not-guilty on all counts in the shooting of three men in Kenosha, Wisconsin (Twitter screen shot)

Kyle Rittenhouse, his body shaking as he struggled to hold back an eruption of tears, listened to a jury foreman in Kenosha, Wisconsin, list count by count Friday, declaring him not guilty on each, before he collapsed to his seat as the verdict on the fifth and final charge was read.

But on the fourth day of deliberations and the 15th day of the trial, the jury unanimously agreed with Rittenhouse's defense, that he had a reasonable belief that his life was in danger and that he acted in self-defense.

From Day One, Rittenhouse had been branded, even by Joe Biden, as a white supremacist who, armed with an AR-15 style rifle, headed to a Black Lives Matter protest to cause trouble and became an "active shooter." But the evidence presented in court showed Rittenhouse was attacked from behind when he shot and killed Joseph Rosenbaum, 36, and Anthony Huber, 26, and wounded  Gaige Grosskreutz, 27.

Rittenhouse and a friend had been invited to join others who had been asked by the owners of a used car lot in Kenosha to protect the property after 100 cars had been burned the previous night during riots in response to the police shooting of a black man, Jacob Blake.

Kenosha, on the shores of Lake Michigan just south of Milwaukee, has been on edge in anticipation of the verdict, closing schools and canceling other gatherings in anticipation of unrest. Wisconsin Gov. Tony Evers has 500 National Guard troops on standby.

See video of the reading of the verdict:

Judge: Pay no heed to the president
The jury clearly was affected by the fact that even the White House was closely watching the case, with Biden, as a presidential candidate last August, characterizing Rittenhouse as a white supremacist in a tweet.

"What I can reiterate for you is the president's view that we shouldn't have, broadly speaking, vigilantes patrolling our communities with assault weapons," she said during her daily briefing. 'We shouldn't have opportunists corrupting peaceful protests by rioting and burning down the communities they claim to represent – anywhere in the country."

In an interview with CNN's Anderson Cooper during the presidential campaign, Biden said Rittenhouse "allegedly was part of a militia coming out of the state of Illinois." And Biden made his oft-repeated false claim that President Trump called white supremacists "very fine people," saying it was the reason he ran for president.

Kenosha Judge Bruce Schroeder instructed jurors to "pay no heed to the opinions of anyone, even the president of the United States, or the president before him."

Joe is setting himself up for a pretty big defamation suit. pic.twitter.com/CIL5QYSFy2

Earlier this week, the judge took the extraordinary step of banning MSNBC from the courtroom after a reporter was accused of following a jury van.

He reported that as jurors entered, several thanked sheriff’s deputies for putting up a folding screen that blocked them from public view.

One juror, a woman, said, "It helps calm my nerves." Another woman was heard saying the "media coverage is insane." A man said he woke up at 3:30 a.m. and couldn’t fall back asleep until 5 a.m.

Schroeder on Wednesday lambasted media coverage of the case and the trial.

"When I talked about, problems with the media when this trial started, we’re there in part, not fully, because of grossly irresponsible handling of what comes out of this trial," he said.

The Jacob Blake shooting itself was falsely portrayed by media before the facts came out and the officer involved finally was absolved.

New York Post columnist Miranda Devine listed “10 heinous lies” about Rittenhouse and the night of Aug. 25, 2020, that have been "debunked."

Devine said that of "all the willful lies and omissions in the media’s coverage of the Steele dossier, Brian Sicknick, the Covington kids, Jussie Smollett, the Wuhan lab, Hunter Biden’s laptop and so on, nothing beats the evil propaganda peddled about Kyle Rittenhouse."

She cited an example of the “central media narrative" that "Kyle Rittenhouse is a white supremacist whose mother drove him across state lines with an AR-15 to shoot Black Lives Matter protesters," which she said are "all lies."

De Blasio: 'Miscarriage of justice'
President Biden, upon arrival at the White House after the verdict, was asked if he stood by characterizing Rittenhouse as a white supremacist.

"Look, I stand by what the jury has concluded," Biden replied. "The jury system works and we have to abide by it."

Later Friday, Biden issued a statement urging Americans to protest "peacefully" while saying the verdict left him "angry and concerned."

"I urge everyone to express their views peacefully, consistent with the rule of law," Biden said. "Violence and destruction of property have no place in our democracy."

The president said the White House and federal authorities are in communication with Wisconsin Gov. Tony Evers' office to "prepare for any outcome in this case."

"While the verdict in Kenosha will leave many Americans feeling angry and concerned, myself included, we must acknowledge that the jury has spoken," Biden said. "I ran on a promise to bring Americans together, because I believe that what unites us is far greater than what divides us."

"Anthony Huber and Joseph Rosenbaum are victims. They should be alive today," de Blasio wrote. "The only reason they’re not is because a violent, dangerous man chose to take a gun across state lines and start shooting people. To call this a miscarriage of justice is an understatement."

"The judge. The jury. The defendant," she wrote on Twitter. “It’s white supremacy in action.

"This system isn’t built to hold white supremacists accountable. It’s why Black and brown folks are brutalized and put in cages while white supremacist murderers walk free," the congresswoman said.

The American Civil Liberties Union said Rittenhouse "was not held responsible for his actions."

"Despite Kyle Rittenhouse's conscious decision to travel across state lines and injure one person and take the lives of two people protesting the shooting of Jacob Blake by police, he was not held responsible for his actions," the ACLU said.

Despite Kyle Rittenhouse’s conscious decision to travel across state lines and injure one person and take the lives of two people protesting the shooting of Jacob Blake by police, he was not held responsible for his actions.

Unfortunately, this is not surprising.

'Biden said things that are so untrue'
Outside the courthouse after the verdict Friday, a reporter asked lead defense attorney Mark Richards how his team and Rittenhouse would like the high-profile case to be remembered.

"I don't represent causes, I represent clients, and the only thing that mattered to me was that my client be declared not guilty," Richards said.

The attorney, noting he formerly was a prosecutor, said of the Rittenhouse prosecution, "I never went after somebody like they did."

Richards noted the prosecution put two brothers on the stand who had been shown during the investigation to be lying.

Richards said the lead prosecutor, Assistant District Attorney Thomas Binger -- in addition to putting the brothers on the stand and not giving the defense a high quality version of crucial drone video of the shootings -- falsely called Rittenhouse an active shooter and contended that the teen chased down the men he shot.

“A prosecutor is supposed to seek the truth. It’s not about winning. And this case was about winning," Richards said.

The attorney noted that Rittenhouse has had 24/7 security, and he believes the teen probably will need to move out of the area for his safety.

"To me it's scary how many death threats we had," he said. "After the third death threat, I quit answering the phone."

Richards was asked about Biden’s August tweet and the president's brief comment Friday morning upon arriving at the White House that he accepted the jury’s decision.

Laughing, the lawyer said he knew the case was going to be big, noting he never had had a case in which within two days, the president and the leading presidential candidate weighed in.

"President Biden said things that are so untrue — [Rittenhouse is] not a white supremacist — I’m glad he accepted the jury verdict."