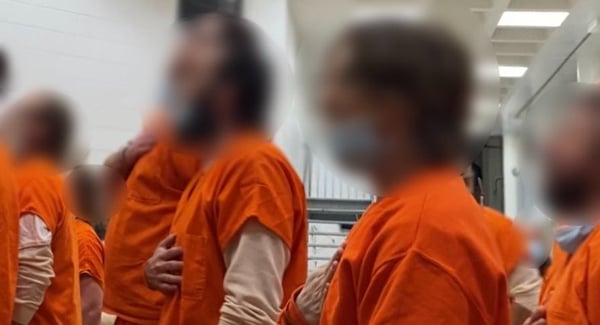 Two Republican members of Congress on Thursday night visited defendants jailed in the nation's capital on charges in the Jan. 6 riot at the U.S. Capitol, confirming a federal judge's determination that the conditions were "beyond belief."

Reps. Louie Gohmert of Texas and Marjorie Taylor Greene of Georgia joined a pre-scheduled tour of the D.C. jail by members of the D.C. Council. But earlier in the day they went to Mayor Muriel Bowser's office and delivered a letter demanding access to the "Patriot Wing" of the jail, arguing it is their  duty as Congress members to oversee how the city spends taxpayer dollars.

Greene recounted the visit in a thread on Twitter.

The Georgia lawmaker said that when she walked into the "Patriot" wing of the jail, she was "greeted by men with overwhelming cheers who rushed out to meet me with tears streaming down their faces," describing them as "forgotten & hopeless."

"It was like walking into a prisoner of war camp and seeing men whose eyes can't believe someone had made it in to see them. They are suffering greatly," she said of the Jan. 6 defendants.

"Virtually no medical care, very poor food quality, and being put through re-education which most of them are rejecting."

Greene said she and her staff are writing a full report of her three-hour tour.

"I am committed to ending this political war and seeing that our justice system is never used against Americans as a political weapon ever again," she said.

The freshman lawmaker said she is "beginning a plan for real prison reform."

"Our nation is broken and our people are divided," the congresswoman said. "It's time to fix it."

Her description of the situation in the jail was confirmed by an aunt of one of the detainees, Cynthia Hughes.

In an interview with Steven Bannon's "War Room," Hughes thanked Greene, as well as Gohmert

"We are so grateful to you," Hughes said to Greene, who was part of the interview, "because now we have an eyewitness to back up everything we've been saying all these months."

Hughes said the conditions in the jail are "really, really tremendously horrendous."

"But the bigger issue is the fact that they are being kept in pre-trial detention -- we're going on 11 months now," she said.

"You have men languishing in jail in horrendous condition with allegedly tresspassing charges," she said.

Julie Kelly, who has done investigative reporting on the Jan. 6 defendants for American Greatness, pointed out in June that despite the repeated claims that Jan. 6 was an "armed insurrection" of "white supremacists," not one person has been charged with carrying or using a firearm inside the Capitol building. The only person who used a firearm inside the Capitol, she noted, was the Capitol Police officer who shot and killed an unarmed female veteran, Ashley Babbitt.

The FBI said in August it had not found evidence that Jan. 6 was the result of an organized plot to overturn the election, according to four current and former law enforcement officials.

On Wednesday, a federal judge ordered a Jan. 6 prisoner diagnosed with cancer be transferred from the D.C. jail after an unannounced inspection of the facility by U.S. Marshals found detainees were forced to live in "deplorable" conditions and were denied necessary medical care, the Gateway Pundit reported.

Greene posted a photo she took of the inmates singing the national anthem, as they do every evening at 9 p.m.

Every night at 9PM, J6 defendants sing the National Anthem at the DC Jail.

And we were there tonight. pic.twitter.com/2uxGbkeqPq

'Court has zero confidence'
The Jan. 6 defendant who was transferred from the D.C. jail, Chris Worrell, was diagnosed with non-Hodgkins Lymphoma while incarcerated and has been denied his cancer treatments for months. He is one of 400 other inmates who will be transferred out of the jail. But none of the approximately 140 other Jan. 6 detainees are included in the transfers.

Federal Judge Royce Lamberth said the conditions at the jail were “beyond belief" and "the "court has zero confidence" the jail will provide proper treatment and not retaliate against Worrell if he remained there.

Water was shut off for days as punishment and clogged toilets flooded cells with sewage. U.S. Marshals also observed corrections officers and staff "antagonizing detainees," denying them necessary medical care and threatening them to "not cooperate" with the Marshals during the inspection.

Over the objection of Biden’s DOJ and citing disgusting, punitive conditions in DC Jail, Lamberth releases cancer patient and J6 detainee Chris Worrell to home incarceration so he can be treated for cancer. https://t.co/4LXM0XUiBT

Last month, Judge Lamberth urged Biden's Justice Department to conduct a full civil rights investigation into the mistreatment of Jan. 6 detainees under the watch of DC Jail Warden Wanda Patten and director of the Department of Corrections Quincy Booth. Lamberth held the two officials in contempt for repeatedly delaying paperwork needed to approve surgery for Worrell.

Worrell traveled to D.C. with his girlfriend on Jan. 6 to hear President Trump speak at the Stop the Steal rally. Because of threats to Trump supporters, he wore a protective vest and legally carried a small bottle of pepper spray. He was outside the Capitol -- he never entered the building -- when people he believed to be leftist agitators began pushing over barricades. He discharged his pepper spray at the agitators in an effort to protect police officers. The government claims he was trying to spray police. But now prosecutors admit the government "do[es] not currently know with certainty the target at which Worrell was spraying."

In a three-part documentary on the Capitol riot that debuted this week called "Patriot Purge," Fox News host Tucker Carlson concludes growing evidence points to "incitement by federal agents" and the "intentional entrapment of American citizens."