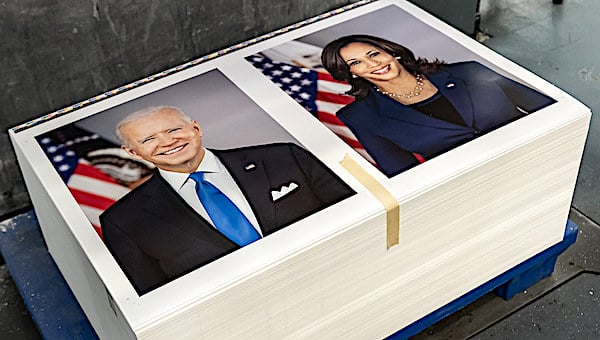 Joe Biden's performance as president has resulted in the Afghanistan pullout disaster, the southern border crisis and the biggest inflation in decades.

Now a poll from McLaughlin & Associates reveals the stunning facts that majorities of Americans believe Biden is incompetent as president, and want him to take a cognitive health test and release the results.

The poll results were outlined by Paul Bedard in his Washington Secrets column.

Explained Bedard, "The poll was released as Biden, who turns 79 tomorrow, was set for his first physical as president at Walter Reed National Military Medical Center Friday. It is unclear if he will take a cognitive test."

He explained, "Former President Donald Trump famously took the test and released the results to quiet critics who believed he was in over his head — as a majority now feel about Biden."

Further, 59% are worried about the future of the country under Biden and Vice President Kamala Harris, who was viewed unfavorably by 55% of respondents.

A full 62% of respondents said the nation is on the wrong track now, under Biden and Harris, with only one in three say they believe it's going the right direction. Also, 55% say the country is in a recession, a surge that accompanied Biden's move into the Oval Office last winter.

And 62% say the U.S. economic is in trouble, getting worse.

Americans continue to say they want a smaller government, with 54% of the respondents picking that answer. Only 33% want a larger government.

The third part of the Democratic power structure in Washington, octogenarian House Speaker Nancy Pelosi, also is underwater by 24 points on her favorability. Fifty-eight percent view here unfavorably, to only 34% favorable.

Perhaps not surprisingly, given Joe Biden's age and recent exhibitions of frailty, 55% believe Harris will be president before the end of Biden's term.

President Trump remains the choice among GOP primary voters to run again in 2024, with 71% support. and 85% of those same voters said they would support him if he runs.