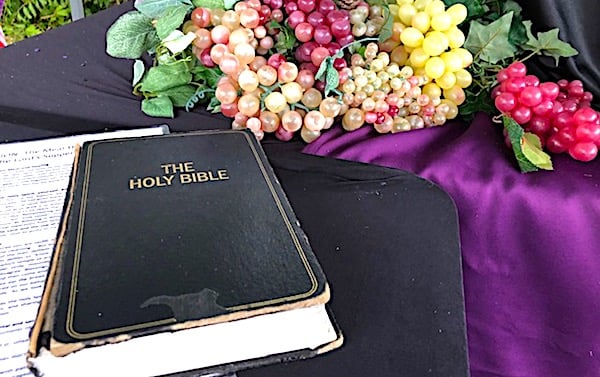 A Holy Bible is displayed at the 21st annual Bible Reading Marathon in Stuart, Florida, on Friday, Nov. 12, 2021. (Photo by Joe Kovacs)

Disputes over whether the government can force Americans into actions or statements that violate their faith have surged since Joe Biden took office.

They involve mandates for people to use pronouns chosen by transgenders, which are scientifically inaccurate. There are those regarding the submission to mandates for medical treatments like the COVID-19 shots. There are demands that doctors and hospitals perform body mutilations on patients with sex dysphoria.

But those agendas are facing powerful headwinds, and appear unlikely to ultimately succeed, based on new polling that reveals three in four Americans say the federal government can't force Americans to violate their religious faith.

The results come from Summit.org, which worked with McLaughlin and Associates, on a poll of 1,000 likely general election voters nationwide.

"There’s a widening gap between the dominant media narrative and what the American people actually believe. We’re seeing that in these numbers. As we approach a holiday established to thank God for His blessings on our nation, the American people still believe that our rights come from God, not from government, and that the right to believe and practice our religion must be respected," explained Jeff Myers of Summit.org.

"Despite everything, it is encouraging to see that Americans still acknowledge the freedoms that made this nation great."

The polling has an accuracy of plus or minus 3.1%.

The results conclude that 73% of American voters who have an opinion on the issue say "that they agree with America's Founders that our rights are given to us by our Creator and not by government."

The other 27% say the Founders were wrong.

That result includes that 80% of Republican voters agree with the Founders' statement that rights come from our Creator. Sixty percent of independent voters agree. Only 51% of Democrat voters agree.

Further, 75% of Americans believe the government "does not have the right to force people to participate in practices that violate their religious beliefs."

Only 16% said the government can force those actions, whether people agree or not.

The support, across party lines, was significant, with 84% of Republicans agreeing that people cannot be forced into violating their faith, 78% of independents, and 64% of Democrats.

"Fifty-seven percent of American voters who have an opinion about the issue believe that civil disobedience is the appropriate response when the government oversteps its legal authority or engages in immoral behavior against its citizens," the poll said.

The category results showed that on the topic of the government forcing Americans to do what they believe their faith prohibits, the strongest results came from those in the Midwest, where 81% rejected the idea, from Trump voters in 2020, where 86% rejected the concept, those who voted Republicans for Congress, at 75%, those who disapprove of Biden, at 87%, Republicans, 84%, conservatives, 88% and rural residents, at 83%.

Summit Ministries, founded in 1962, sponsors conferences for young adults and the organization has trained tens of thousands of people in biblical truth.