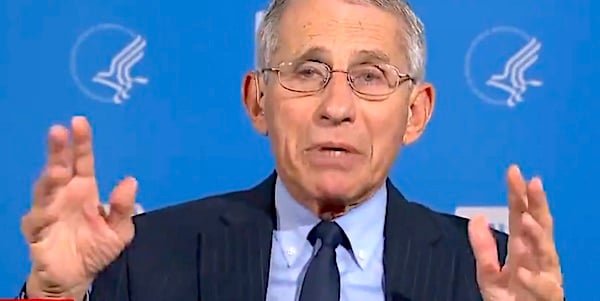 White House coronavirus adviser Dr. Anthony Fauci and Centers for Disease Control Director Dr. Rochelle Walensky are among the defendants in a class-action lawsuit against President Biden's COVID vaccine mandate filed by federal employees who argue they have natural immunity from a previous infection that affords protection superior to the vaccines.

The federal workers, who intend to stop the mandate before a deadline this month, charge it is "at the very least, arbitrary and capricious in addition to being overbroad and poorly designed," Just the News reported.

Attorney John Vecchione, who is representing the employees, spelled out the broader implications of the mandate.

"If your federal employer can do this," can they also "impose liposuction for the overweight or take spare kidneys for other workers in need?" he asked.

The suit argues the mandate violates the workers' constitutional rights against "unnecessary medical treatment," pointing out the emergency use authorization statute still governs all but one vaccine.

The case was filed in in the U.S. District Court for the Southern District of Texas, which is overseen by the the 5th U.S. Circuit Court of Appeals. It was the 5th Circuit that halted Biden's related private employer COVID vaccine mandate over the weekend, citing "grave statutory and constitutional issues."

The fact that the mandate does not grant exemptions for both natural immunity and fully remote workers calls into question whether it's "designed to accomplish a legitimate federal purpose," the complaint contends.

Does natural immunity against COVID matter to the government in its push to get people vaccinated?
5% (56 Votes)
95% (989 Votes)

The suit also argues the mandate accepts "foreign vaccines that the FDA has not approved in any fashion" and which are measurably less effective than natural immunity.

Civilian Navy employee Isaac McLaughlin, the lead plaintiff, is joined in the case by federal employees in Texas, Florida, Georgia, Virginia, Louisiana, New Jersey and California. They work for U.S. Immigration and Customs Enforcement, the Federal Aviation Administration, the Transportation Security Administration, the Department of Agriculture and the Secret Service.

The suit points out that while the FDA has given full approval to Pfizer's Comirnaty vaccine, the shot is in short supply. And it is "legally distinct" from Pfizer's BioNTech vaccine, which is still under emergency use authorization. The FDA has acknowledged that there are "differences" between the two vaccines, without spelling them out, but insists they are interchangeable. But the complaint contends that even if they were the same, "no federal employee can be guaranteed access" to the fully approved version.

"Accepting federal employment does not mean serving as a guinea pig for emergency use drugs," the complaint states. Even an increase in antibody levels would "provide no discernible, let alone compelling, benefit" to the plaintiffs or the federal workforce.

The deadline for compliance is Nov. 22. But that is misleading, the lawsuit argues, because the guidance supplied by the federal government defines "fully vaccinated" as two weeks after receiving either the two-dose Pfizer or Moderna vaccines, or the one-shot Johnson & Johnson vaccine.

The suit includes 20 pages of declarations by epidemiologists Dr. Martin Kulldorf of Harvard Medical School and Stanford's Jay Bhattacharya on the superiority of natural immunity.

'The evidence shows'
A former health adviser to the federal government, Dr. Paul Elias Alexander, has teamed with Dr. Harvey Risch of the Yale School of Medicine and others to compile a list of 106 studies indicating natural immunity to COVID-19 from a previous infection is superior to immunity afforded by vaccines.

"We should not force COVID vaccines on anyone when the evidence shows that naturally acquired immunity is equal to or more robust and superior to existing vaccines. Instead, we should respect the right of the bodily integrity of individuals to decide for themselves," Alexander writes for the Brownstone Institute.

He is a former assistant professor at McMaster University in Hamilton, Ontario, in evidence-based medicine and research methods; a former adviser to WHO-PAHO in Washington, D.C., and a former senior adviser for COVID pandemic policy at Health and Human Services.

Alexander charges that public health officials, the medical establishment and establishment media are "misleading the public with assertions that the COVID-19 shots provide greater protection than natural immunity."

He notes the CDC's Walensky claimed in a statement published October 2020 in the British journal The Lancet that "there is no evidence for lasting protective immunity to SARS-CoV-2 following natural infection" and "the consequence of waning immunity would present a risk to vulnerable populations for the indefinite future."

But for more than a century, it's been known that natural immunity confers protection against a respiratory virus's outer coat proteins. And there is strong evidence for the persistence of antibodies.

Somehow, he says, the CDC recognizes natural immunity for chicken-pox, measles, mumps and rubella but not for COVID-19.