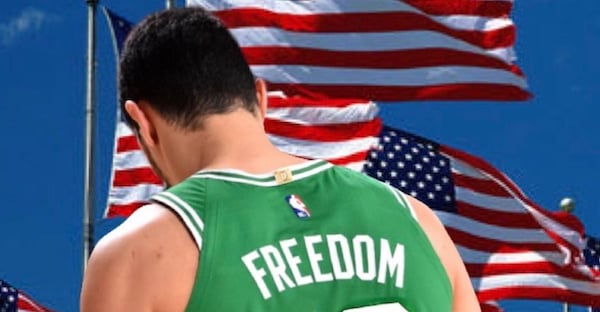 He's called Chinese communist leader Xi Jinping a "brutal dictator," prompting a ban on the airing of his games in the country, and now he has proudly changed his name to celebrate becoming an American citizen.

Enes Kanter, a center for the Boston Celtics, is now legally Enes Kanter Freedom. Later this week, when his team plays the Philadelphia 76ers, the name "Freedom" will be on the back of his jersey.

He told CNN the name change will reflect the "fight" for freedom he has waged throughout his life after growing up in Turkey. 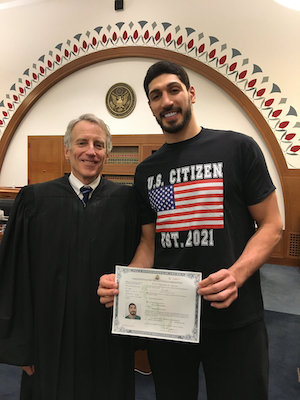 Kanter, who became a naturalized citizen Monday, said "freedom is the greatest thing a human being can have."

"That's why I wanted to make that word a part of me, and carry it wherever I go," he said.

At his naturalization ceremony, he waved a miniature U.S. after reciting the oath of citizenship and said, "Freedom - that's it."

Is Enes Kanter Freedom more American than most natural-born citizens on the political left?
97% (30 Votes)
3% (1 Votes)

Kanter also has called Turkish President Tayyip Erdogan a "dictator." In 2019, Turkish authorities filed an international arrest warrant, accusing him of allying with groups that tried to overthrow the Erdogan regime in 2016. He denies the allegations.

In October, China's video-streaming giant Tencent shut down the live broadcast of a game between Kanter's Celtics and the New York Knicks after Kanter posted a video on Twitter describing Chinese President Xi Jinping as a "brutal dictator" and calling for the independence of Tibet.

"Tibet is part of China," Wang said. "We welcome unbiased friends upholding objectivity across the world to Tibet. In the meanwhile, we never accept the attacks and smears on Tibet's development."