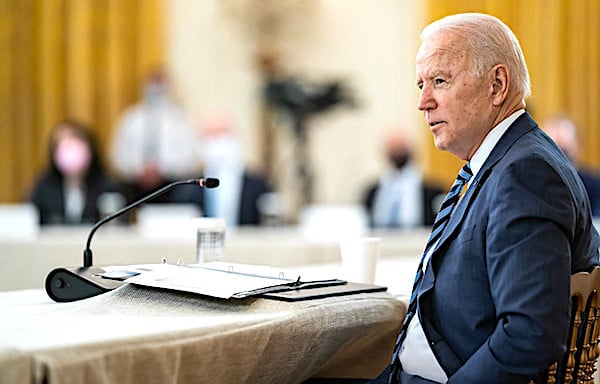 President Joe Biden participates in a meeting on cybersecurity, Wednesday, Aug. 25, 2021, in the East Room of the White House. (Official White House photo by Adam Schultz)

Under a Joe Biden presidency, the nation was told during his campaign, there would be new "unity," a new moderate path that would bring Americans together into one big happy family. Out with the years of "division" under President's Trump's successful economic plans, his border security efforts, even his "Abraham Accords" bringing new levels of security in the Middle East.

Then Biden was inaugurated and came the southern border illegal alien crisis, the attacks on the pro-lifers in America, the Afghanistan disaster, inflation, a developing energy crisis, and more. He even apparently dozed off while attending the recent Glasgow climate summit.

Actually, that idea of unity is so far from the truth a columnist now has contributed a piece to the Daily Mail that actually raises the prospect of a new civil conflict in the nation, a development described as "not terribly unlikely."

The warning comes from freelance write Malcom Kyeyune, who lives in Uppsala, Sweden.

"How likely is it that there will be some sort of civil conflict in the near or mid future for the United States?" he wrote. "Unfortunately, the correct answer here may very well be that it is not terribly unlikely."

He said it's significant that American is nearing its 250th birthday, a point at which "empires" either "tend to either slowly — or very, very quickly — fall apart," he suggested. Then there is a loss of the "legitimacy of the its elite" as well as failing faith in elections.

"America is currently a malarial swamp of strange new faiths, creeds, soothsayers and itinerant prophets; from Q to vaccine scientism to various forms of psuedo-gnosticism centered around trans people," he explained.

He wrote, "Talk of insurrection, secession, civil conflict and civil war is no longer the chatter of the gullible and the mentally ill. It's entering the fringes of polite society. Some support this 'national divorce'; others are opposed to it. Others claim they would actually prefer to declare war on their recalcitrant countrymen rather than let them go their own way unmolested."

It's simply not "irrational" to consider such possibilities, "given the times," he explained. "The year 2021 has thus far been a spectacular year for signs of political decline: the U.S. has now seen all the notable 'horsemen of the apocalypse' that historically herald strife and revolution appear, one after another."

He cited "political division among its elites, increasing loss of legitimacy in the eyes of the population, military defeat abroad, and a new and very ominous crisis in the real economy, with no end date in sight."

"Any one of these crises would be bad enough on their own; taken together, they represent a truly serious threat to the stability of the current order," he said.

He said, too, there is a "misconception" that a civil conflict would be unlikely or impossible because of the massive strength of the American military and faith in its ability to overcome "even a numerically large, dissatisfied internal population."

"This is a dangerous misconception," he said. "While the U.S. military is indeed powerful and lavishly funded, it is a military designed to fight other states. Warfare between states is bound by rules and regulations; it is based on consent. This might seem a strange assertion to make, given that a country cannot just decline a war declaration from an enemy, but it holds true. There's a formal or informal understanding of who is an actual combatant and who is not," he explained.

But other warfare might develop in which combatants would not "play by the rules."

"An insurgency in America has about as much reason as the Native Americans once did to follow the rules of their enemies; they are under no compulsion to wear blinking strobe lights to make themselves easier for the drones to target. And that simple fact means that a counterinsurgency effort in the U.S. is almost certainly doomed to fail," he arned.

What makes the U.S. military powerful, from high tech weapons to immense power, "are not just useless, but counterproductive," in counterinsurgency, he said.

Nor is the military anywhere near large enough, he said.

"During Operation Banner, the British military deployed at most 20,000 soldiers in Northern Ireland to keep a lid on that wayward province. The U.S. armed forces consist of about 1.3 million active duty personnel, but this is spread out over five branches (Army, Marine Corps, Navy, Air Force, Coast Guard), and only a small minority of military personnel are actually combat troops. It is thus very unlikely that the armed forces could scramble more than 100,000 regulars willing to do the job of holding an M4 carbine and patrolling down the main street of Anytown, Texas.

"To put that into perspective, Northern Ireland is about 2% the size of Texas," he said.

And dispatching military units to govern at gunpoint the "very areas" from which they came would provide an "unreliable" force.

"And the more brutality is used against recalcitrant red states, the more these soldiers will be ordered to fight and kill their own friends and family — a recipe for serious mutiny and disobedience," he said.

The even bigger "elephant in the room" is that soldiers attacking, or ordering attacks, on American civilian would be known quickly.

Further, he said, "What is significant about America today is not that it's nearing its 250th birthday, but rather the clear and advanced signs of sickness in the body politic. The ranks of America's military are now sullen and battered after 20 years of failed nation-building, while its higher officer corps is increasingly alienated from the world of its grunts, mirroring that same cultural, economic and social divide that is currently poisoning civilian life in the U.S."

He concluded, "If there is one time throughout history where civil wars are actually likely to occur, it is precisely when a delegitimated elite undertakes necessary reforms after letting underlying problems fester for decades. That is when states are at their weakest, and when they are vulnerable to the worst forms of internal disasters. Sadly, that might just be where America is headed today."