You've seen the legacy media and network reporting on Jan. 6 at the U.S. Capitol: those hordes of sword-waving, window-smashing (likely drooling) President Trump supporters who assaulted not just the entire nation but democracy itself.

But what if it isn't true?

A new movie, "Capitol Punishment," is being released on Thanksgiving Day that reveals first-person accounts of what looked, on that day at that location, like "a trap."

The plain facts of what happened support suspicion. There were tens of thousands at a rally with Trump that day, and hundreds then went to the Capitol. Many protested peacefully about Congress' adoption of those still-suspect 2020 presidential election results that gave the White House to Joe Biden.

Since then, an analysis has confirmed that the legacy media suppressed damaging information about Joe Biden and son Hunter enough that the actions likely changed the results from a Trump victory to a Biden win. 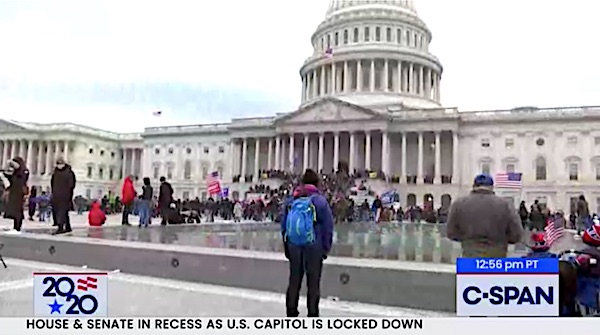 Further, another study revealed that Mark Zuckerberg's $420 million handed over to groups – and elections officials – to recruit voters from Democrat areas also like was enough to change the election results.

Still, there was a small portion of those Capitol protesters who did vandalism.

But the FBI's actions have been stunning: Many of the suspects on charges of crimes like trespassing have been kept in jail since last January. They often been held in solitary, in injurious conditions.

That's in contrast to the Black Lives Matter and Antifa protesters who during 2020 did hundreds of millions of dollars in damages to American cities in riots that actually killed people and burned down entire neighborhoods. They've mostly faced no charges, certainly not any that would involve being incarcerated for months awaiting adjudications.

The movie reveals the real story from that day.

One part of the journey is testimony from Derek Kinnison, who was there that day with a friend.

"We saw a set of open doors," Kinnison explains to the camera. "My partner Tony, he looked at me, I looked at him. He said, 'What do you think about that?' And I said, 'I don't like it.'

In fact, video from the day reveals there were some people who entered the building while security officers held doors open for them.

The revelations in "Capitol Punishment" show that even though Kinnison didn't enter the building, the FBI showed up at his house, and they also did at Tony Martinez' home.

Another visitor to the Capitol that day, Chris Burgard, said, "I just saw Capitol police move the barriers, and they’re letting people into the Capitol."

But there were what appeared to be pitched battles at other entrances.

Easton Cantwell, also at the building, wondered in the film, "Why are you letting people in on one side of the building but then fighting a raging battle on the other?"

Those who were visited by the FBI recall being treated as domestic terrorists, a label that Democrats in Congress quickly applied to them, and have continued to repeat.

Filmmakers Nick Searcy and Burgard said they wanted to expose the truth – and the government's politically driven tactics, in the movie.

Searcy told the Western Journal, "As shooting progressed, it became more evident that our real story had to be about the people who were being persecuted for nothing, for just going to Washington, basically for just saying out loud that they believe the election is stolen."

Sign up to see "Capitol Punishment" when it streams on Thanksgiving Day.