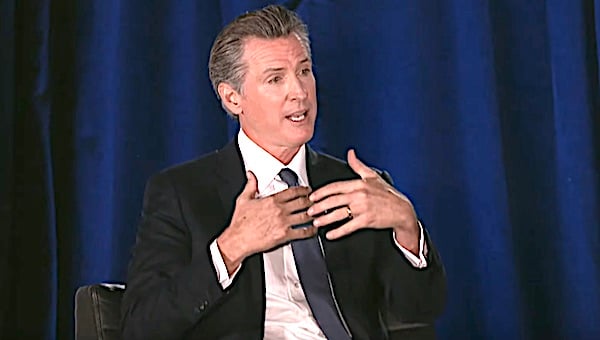 Two reports have linked the days-long disappearance of California Gov. Gavin Newsom to COVID shots, and the reaction he suffered from them.

His absence had prompted considerable comments, as he last had been seen in the latter part October, then only reappeared days ago at a socialite's wedding events.

Among other things he missed attending the huge global warming summit conference in Glasgow during that time period.

It is the Children's Health Defense that explained a source confirmed Newsom suffered "an adverse reaction to the Moderna COVID vaccine."

The source "asked not to be identified, but described Newsom's symptoms as similar to those suffered by patients with Guillain-Barre syndrome.

An increase in cases of Guillain-Barre was noticed following the 1970s distribution of swine flu vaccines in America, although the Centers for Disease Control says the exact link remains unknown.

The report said, "GBS is a neurological disorder in which the body’s immune system mistakenly attacks part of its peripheral nervous system — the network of nerves located outside of the brain and spinal cord — and can range from a very mild case with brief weakness to paralysis to leaving the person unable to breathe independently."

The governor got his COVID shot on Oct. 27, and hadn't been seen until last weekend's wedding festivities.

His office had issued a statement Oct. 29 said "family obligations" were keeping him too busy to keep his scheduled appearances.

Robert F. Kennedy Jr., the chief of the CHD, said, "if it’s true the governor has suffered debilitating neurological injuries following vaccination, it raises grave ethical questions about his seemingly dishonest efforts to conceal his injuries while implementing aggressive policies to force the children and working people of California to endure similar risks."

Newsom has been a high-profile promoter of COVID shots, and mandates for those treatments with the experimental products.

Just weeks ago he confirmed school children in the state must take the shots when they get approval from federal regulators.

The Daily Mail also confirmed that Newsom got a "double jab" of COVID booster and flu shot, and that "made him sick enough" to cancel his global warming conference appearance.

It's report, citing sources, said the governor had "muscle weakness and fatigue."

The report noted Daniel Lopez, the governor's press secretary, claimed Newsom had "no adverse reaction to his booster shot."

The disappearance of the governor for 12 days prompted speculation about his condition and status, triggering his wife, Jennifer Newsom, to go to social media to attack "haters without a life" who were raising questions.