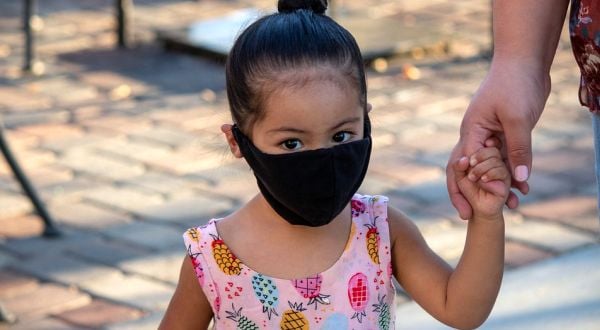 With parents warning vaccine mandates for children will prompt a backlash exponentially bigger than the one over masks and racist Criticial Race Theory curricula, Republicans in Congress have introduced a bill to block the federal government from imposing such policies.

The legislation would prevent the federal government from withholding education funds on the basis of vaccination requirements, the Daily Caller reported.

"No Federal education funds may be withheld from an otherwise eligible recipient because such recipient does not require students or employees to be vaccinated against COVID-19," the bill says.

The bill's sponsor, Rep. Lance Gooden, R-Texas, told the Daily Caller the Biden administration's "track record suggests it is only a matter of time before they mandate public schools require COVID vaccination."

"I believe the decision to vaccinate a child should be made by the parents, not the government, and my legislation would ensure the government does not take that choice away," Gooden said.

Co-sponsors of the bill include Republican Reps. Lauren Boebert of Colorado, Madison Cawthorn of North Carolina, Chip Roy of Texas, Mary Miller of Illinois and Jeff Duncan of South Carolina.

On Tuesday, an advisory panel for the Centers for Disease Control and Prevention voted unanimously to approve the Pfizer vaccine for children aged 5-11. The recommendation was approved by CDC Director Rochelle Walensky.

'A red line they better not dare cross'
Parents have condemned San Francisco's plan to mandate vaccination for school children as young as 5, arguing no one under the age of 20 has died from the virus in the city.

And only 1,529 children in the city are recorded as having contracted the virus in that span.

Political commentator Dan Bongino, a former Secret Service agent, warned Thursday afternoon that if Democrats impose vaccine mandates on children, they will see a reaction from the "mama and papa bears" that surpasses anything seen in the recent Virginia election.

"We can take a lot, but don't you toy with my kids," he said in a Fox News segment.

"That is a red line they better not dare cross."

Matt Walsh, a conservative pundit who expressed to his local school board his fierce opposition to the districts' mask mandate, echoed Bongino.

"If they try to pass any kind of vaccine mandate for children, they will see a backlash unlike anything they can imagine," he said on Twitter.

"It will make the school boards look tame by comparison. You try to force this drug into our children's bodies and you will reap the whirlwind," he said. "Just watch."

Florida Republican Gov. Ron DeSantis vowed last weekend that there will be not vaccine mandate for schools in his state.

In Florida, there will be no vaccine mandate for children in our schools.

This is a decision that belongs to parents. pic.twitter.com/EEu13HZ41c

Protests against a #VaccineMandate for #Children in #NYC.
And, @TheLancet confirmed that vaccinated people can spread the virus. pic.twitter.com/1kf0gUVEv4

The associate editor of the British Medical Journal, Dr. Peter Doshi, said in a panel hosted this week by Sen. Ron Johnson, R-Wis., on vaccine mandates that there is no science supporting universal vaccination, because there is no long-term safety data.

He pointed out that Moderna's clinical trials do not officially end until late 2022.

"Doctors who want to see the clinical trial data will have to wait another year before getting access," he said.

"So while we're told to keep following the science, what we are following is not a scientific process based on open data," Doshi continued. "We're follow a process in which the data are treated as secret, and in my view, there is something very unscientific about that."

Hours before the CDC panel's approval Tuesday of the Pfizer vaccine for children 5-11, the British Medical Journal published an article featuring a whistleblower's charge that poor practices at a contract research company helping to carry out Pfizer's COVID-19 vaccine trial last fall may have compromised data integrity and patient safety.

Pfizer has produced an ad casting the children who participated in the trials for its experimental vaccine as "super heroes."

Pfizer is marketing their death-shot to young children by saying they’ll be super-heroes.

The satanists who manage vaccine companies get a big kick out of killing people, but there is nothing more special to them than killing young children. pic.twitter.com/f6Q34MtxpD

Most parents not eager to vaccinate their kids
Advisers to FDA and CDC committees expressed concern about the lack of data on long-term risks before approving the Pfizer vaccine for children ages 5-11.

And a new survey finds only 27% of parents are eager to get the shots for their kids.

Many prominent epidemiologists and other health experts, such as Dr. Ben Carson, have argued that the risks of vaccinating children outweigh the benefits.

During the FDA advisory committee meeting, Dr. Eric Rubin, editor-in-chief of the New England Journal of Medicine, expressed the concern of many members about possible severe side effects that cannot yet be measured. He concluded, nevertheless, there was no other way forward.

"We're never going to learn about how safe the vaccine is unless we start giving it," he said. "That's just the way it goes."

On Sunday, Carson, the acclaimed former Johns Hopkins pediatric neurosurgeon and HHS secretary, said the Biden administration's move to vaccinate young children for COVID-19 amounts to a "giant experiment," arguing there is no sufficient data to determine the long-term risks posed by the shots.

Here some of the other health experts who believe children should not be vaccinated:

In a Project Veritas probe, an employee of the U.S. Department of Health and Human Services presented video recordings of colleagues privately voicing alarm about the safety of the vaccines, alleging a cover-up of "evil at the highest level." In another investigation, two Johnson & Johnson officials said children don't need the vaccine and it poses the risk of "unknown repercussions down the road."

Pfizer scientist Rahul Khanke said employees are "bred and taught" to insist that the "vaccine is safer than actually getting COVID." He said "we cannot talk about this" in public.