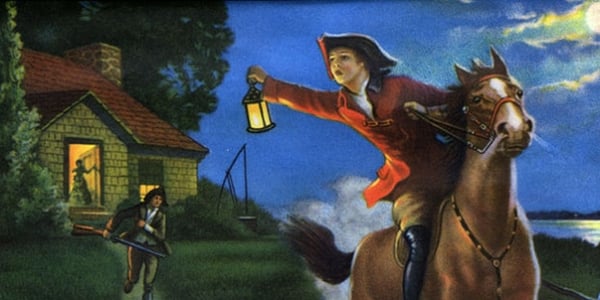 Paul Revere warned colonists that the enemy was coming by sea with two lanterns in the old church tower.

But today, a coalition of patriotic individuals and organizations believes the enemy already is within, so this time it's a single lantern – as the enemy is coming by land.

That's the theme of a new campaign to remind Americans of the privileges they have simply for living in the nation they do. And to remind them that there is an enemy.

It's the Red, White, n Blue Tour that already has a presence on Facebook and plans to have a patriot carry a lantern in every state in the union between Oct. 24 and Dec. 24.

See an explanation of the Liberty Lantern relay:

A report at FrontlineAmerica said the "spirit of Paul Revere" is back in the Unite the Light events.

"Americans who feel plugged into the darkness of despair should find a glimmer of encouragement in this story about a group of patriot Americans who have joined together in an absolutely brilliant two month-long journey," the report said.

Organizer Felisa Blazek explained there the events are for "everyone who had has the courage to speak up and be attacked" yet still is standing.

That report explained the famous midnight ride was on April 18, 1775, but the fight actually started much earlier. Likewise, events already have been appearing that make the new campaign appropriate.

The campaign will have the Liberty Lantern carried by volunteers across the 50 states. It began Oct. 24 in Portsmouth, New Hampshire and will conclude Dec. 24 at an exact location to be announced later.

Those scheduled to participate already include Alveda King, Wendy Rogers and more.

Those who carry the lantern are being asked to post a two-minute video about their experience – and what they are doing to preserve the Republic.

Marilyn Matrisciana, one of the dedicated individuals making the events happen, told WND the goal is to sound the alarm and call for a second American revolution, this one based on information.

She explained those participating will communicate through social media, as the specific route is not being announced in advance because of the dangers posed from those who would sabotage such an event.

And to "celebrate the awakening taking place across the country regarding the threats against individual liberty."

The report explained the Liberty Lantern is traveling by plane, train and auto, as well as truck, horse and buggy and foot. Also ferry, horseback, subway, motorcycle, bicycle and surf board.