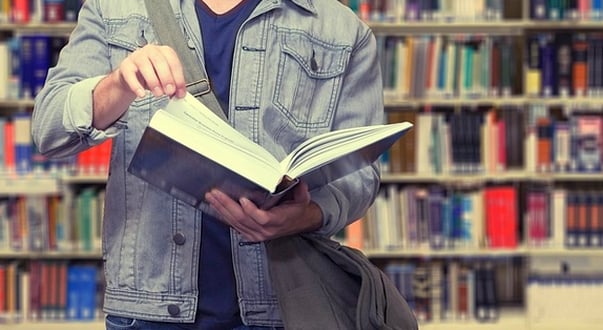 WARNING: This story contains some references to sexual activity that some readers may find offensive.

A Fairfax County, Virginia, mother told the Daily Caller News Foundation that the principal at her son’s school told her that parents are not allowed to check out books at its library.

On Oct. 27, Stacy Langton, a mother of six kids, went to Fairfax High School (FHS) to pick up one of her sons for an appointment, she told the DCNF. While she was at the school, she and her son decided to look for the book, “All Boys Aren’t Blue,” by George M. Johnson, which depicts the author’s experience of sodomy and sexual assault by his older cousin, according to Langton.

Langton previously spoke out at a Sept. 23 Fairfax County Public Schools school board meeting, where she went viral for her calling out the contents of “Lawn Boy” by Jonathan Evison and “Gender Queer” by Maia Kobabe, which she said contained child pornography and pedophilia available to young teenagers in the district’s libraries.

On Nov. 3, she missed a call from the school’s principal, Maureen Keck, who called her again the next day. Keck said it had been brought to her attention that Langton was on campus on Oct. 27 and had checked out “All Boys Aren’t Blue,” which the principal claimed was against the rules, Langton told the DCNF.

“I was like, ‘Whoa, whoa, whoa, wait a minute. Could you please repeat that for me slowly, because I want to make sure I heard you correctly,'” Langton said, describing the phone call to the DCNF.

Are educators across America pushing a perverse sexual agenda onto students?
99% (112 Votes)
1% (1 Votes)

The principal told Langton the rule was not specific to her, but that all parents were prohibited from checking out library books. Langton told her that she had not heard of this policy and requested Keck send her proof once they got off the phone.

Keck either snooped on her son’s records or got alerted to the fact that she has checked out another book, Langton alleged, the DCNF reported.

The librarian at the school on Oct. 27 recognized Langton and did not mention any rules that would stop her from checking out a book or coming into the library.

“At no time did the librarian and say, ‘Hey, you’re not supposed to be in here’ or ‘We don’t allow parents in the library,’ there was no problem,” Langton said, referring to the day she went with her son to check out “All Boys Aren’t Blue.” “She knows who I am, she knows I’m my son’s mother and we checked out the book because you can do that.”

On @LarryOConnor @WMALDC Friday: Principal at Fairfax High School: parents aren’t allowed in the library. They DON’T want you to see what your children have access to at school.
I’ll be at @fcpsnews #schoolboardmeeting Nov. 11th#IWontBackDown https://t.co/CLeaK4gCHi

Keck sent Langton two policies after their initial conversation, neither of which mention that parents are barred from entering the school’s library or from checking out books, according to a copy of the policies obtained by the DCNF.

“Maureen Keck lied to me and what she said is absolutely not true,” Langton told the DCNF.

Keck reportedly told Langton that she had violated school policy on Oct. 27 by not wearing a visitor badge.

The first policy that Keck sent Langton outlined procedures for entering the school, which said all visitors must use the automated visitation system when checking in.

Langton told the DCNF that the visitation system was broken at the time of her visit and had been for quite some time, but Keck claimed she was unaware of the issue.

“Schools must designate an employee to be responsible for maintaining the automated visitor management system and the integrity of the sign-in process,” according to the policy Keck sent Langdon.

Langton said the policy just shows the school didn’t do what was required by its own regulations.

The other policy Keck sent Langton outlines plans for security, safety, and emergency procedures “in the event of fires, threats, hazardous materials exposures, and weather-related or other emergencies,” but makes no mention of parents’ ability to check out books, the mother told the DCNF.

“There is nothing in anything she sent me, which says parents are not allowed in the school library at Fairfax High School, nothing, so she lied to me,” Langton told the DCNF.

The most recent book Langton checked out, “All Boys Aren’t Blue” is a first person narrative where Johnson details his life story about how he became aware of his sexual identity and gender, which he describes as “gender queer.”

About 200 pages into the book, Johnson describes in pornographic detail how his 18-year-old cousin sodomized him at the age of 13, Langton told the DCNF.

Scenes in the book depict the author’s guilt for engaging in acts of incest with his cousin.

“You then grabbed my hand and made me touch it. It was the first time I had ever touched a penis that wasn’t my own,” Johnson wrote. “Cousins weren’t supposed to do these things with cousins. But my body didn’t react that way.”

The book describes a scene where his cousin urged him to perform other sexual acts.

“There you stood in front of me full erect and said, ‘Taste it.’ At first I laughed and refused. But then you said, ‘Come on, Matt, taste it. This is what boys like us do when we like each other.’ I finally listened to you,” Johnson wrote.

The book allows Johnson to memorialize the assault he experienced so everyone else who reads the book will experience the same abuse, Langton told the DCNF.

“It’s almost like he’s perpetuating the abuse himself and it’s like every child who comes into contact with that book is then going to read it and be victimized by the perpetrator who sexually abused him,” Langton alleged, the DCNF reported.

Langton has put her name into the randomized lottery to speak at FCPS’s Thursday school board meeting, which she is eligible to speak at for the first time since her time was cut off on Sept. 23.

“There’s a lot of people who just think it’s rigged or whatever, and we have no way of knowing because it’s not transparent,” Langton told the DCNF.. “I hope I get chosen, because they took my time last time, I didn’t even get to finish speaking and obviously, I’m not done.”

Keck and the Fairfax High School librarians did not immediately respond to the Daily Caller News Foundation’s request for comment.