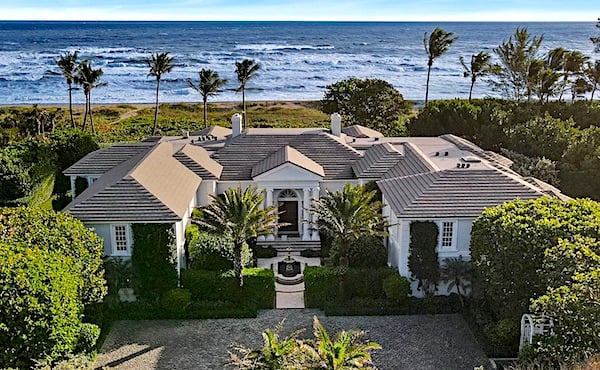 An oceanside home in Hobe Sound, Florida, is reported to be the possible new home of U.S. House Speaker Nancy Pelosi. (courtesy Zillow)

California has serious water problems, housing costs that are simply a joke for many families, a reputation for life-ending forest fires, a social agenda that leads the nation in attacks on traditional marriage and people of faith, and more.

And don't forget the possibility of the "Big One," an earthquake that films portray as turning the San Andreas fault into another Grand Canyon and leveling cities.

No wonder House Speaker Nancy Pelosi apparently wants to leave, even though she's done much in her decades in Congress to make the state what it is.

After all, she's represented in Congress one of the state's prominent districts since the 1980s – before the fall of the Berlin Wall.

And she undoubtedly can afford it, because even though her congressional salary has been what most families would consider great, it doesn't nearly add up to the hundreds of millions of dollars in assets she, along with her businessman husband, have reported.

So now there are reports that she's purchased a $25 million beach estate in Hobe Sound, Florida, about half an hour away from President Trump's estate in Palm Beach.

The proximity of the property to the ocean reveals clearly that she has no concern for rising sea levels caused by global warming – or climate change as it's now known.

The Conservative Treehouse report said rumors have been swirling about Pelosi visiting properties in the state run by Ron DeSantis, a Republican governor and a huge critic and opponent of not just President Biden's leftist agenda but also the Democratic Party that Pelosi runs.

"Everyone knows if Democrats get crushed in the 2022 mid-terms, she will exit congress faster than a fat kid playing dodge ball. Pelosi was spotted on the same flight as Marjorie Taylor Greene, and then spotted again looking at a specific $25 million beach estate," the report said. "Obviously, it would be a little hypocritical for Speaker Pelosi to politically rail against the policies of Governor Ron DeSantis and yet support those policies with a physical move to the state. However, that said, Democrats -particularly those in political leadership- are notorious for double standards."

The property she reportedly has acquired recently was listed as sale "pending" rather than available.

Local sources telling me this is the home Nancy Pelosi bought on Jupiter Island, FL. pic.twitter.com/1VKvXsME2V

@SpeakerPelosi must be nice while the whole country is struggling and you go by a 25 million dollar house on Jupiter Island. We don't want you here!! 429 South Beach Road #WeDontWantYou#Florida#NancyPelosi

The Conservative Treehouse reported, "There’s a lot of speculation, and not any specific evidence to support the claims."

It noted the home in 2015 for $15 million and was then put up for sale again this year in May for $25 million. "That gives you an idea how rapid the home values in Florida have risen in the past few years."

The report noted, "If Pelosi has purchased that house, Florida Governor Ron DeSantis will have a fun talking point in his reelection campaign; especially because the official Democrat funding mechanisms (Democrat Governors Association) have admitted it would be futile to try and defeat DeSantis – they ain’t wasting money trying."

Pelosi easily could afford the property, with the hundreds of millions of dollars she's made while in Congress.

But if she ends her political career with a move to Florida, she'll be known in retirement as the first female speaker of the House – and the only speaker to have orchestrated two impeach-and-remove campaigns against a sitting president.

And failed both times.

It would be a stain not just on her, but on her family's name. She was born Nancy D'Alesandro, the daughter of Baltimore's former mayor who also was a five-term Maryland congressman. Her brother also was a mayor.

Pelosi's other properties include a condo in Washington, a home in her district in San Francisco, and an estate in California's wine country.

She was instrumental in pushing Barack Obama's Obamacare forward, famously telling American taxpayers Congress would have to pass the bill so that they could find out what's in it.

She later refused to support border security on the southern border, battling President Trump over the money for that security effort.

She orchestrated a congressional rejection of the plan, but it was vetoed.

In recent years she's constantly been at odds with progressive extremists in her own party.

Her hatred for Trump boiled over on national television when she, at the conclusion of his State of the Union address, took her copy of the speech and stood up, blatantly ripping the speech into pieces in front of television cameras, which had caught her earlier testing the speech paper to see how easily it would rip.

There long have been rumors that the octogenarian would be leaving Congress, especially as after the 2022 midterms the GOP is expected to be in the House majority again, and she would be relegated to insignificant minor party speeches.