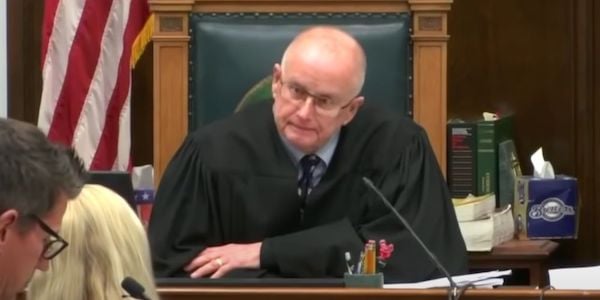 "I have instructed that no one from MSNBC news will be permitted in this building for the duration of this trial. This is a very serious matter and I don’t know what the ultimate truth of it is, but absolutely it would go without much thinking that someone who is following the jury bus – that is an extremely serious matter and will be referred to the proper authorities for further action," the judge said.

Fox News reported Judge Bruce Schroeder explained the man who was observed following the bus, and caught, identified himself as James J. Morrison, and told investigators he was instructed to follow the vehicle.

"Last evening a person who identified himself as James J. Morrison and who claimed that he was a producer with NBC News... and under the supervision of someone... in New York for MSNBC. The police when they stopped him because he was following in the distance of about a block and went through a red light, pulled him over and inquired of him what was going on and he gave that information," the judge said.

"He stated he had been instructed by [a supervisor] in New York to follow the jury bus."

The man was ticketed for violating a traffic control signal, the report said.

But there already have been concerns expressed about threats to the jury should they not return the proper verdict in the Rittenhouse case. Leftists have demanded that he be convicted, regardless of the evidence, and have issued a number of threats should that not happen.

Was the Rittenhouse judge right to bar MSNBC employees from the courthouse?
99% (83 Votes)
1% (1 Votes)

The 18-year-old Rittenhouse is on trial for shooting and killing Joseph Rosenbaum, 36, and Anthony Huber, 26, and shooting and wounding Gaige Grosskreutz, now 28.

The three were among rioters on the streets of Kenosha last year who were destroying property because of a local police encounter with a suspect, during which the suspect was injured.

Fox News said a statement from Kenosha police explained, "Last night a person who is alleging to be affiliated with a national media outlet was briefly taken into custody and issued several traffic related citations. Police suspect this person was trying to photograph jurors."

The police report continued, "This incident is being investigated much further. There was no breach of security regarding the jury, nor were there any photographs obtained. This investigation remains active and open, no further information."

Rittenhouse has explained he was in Kenosha to defend private property from rioting thugs, and the shootings were in self-defense, a position with which even prosecution witnesses appeared to agree.