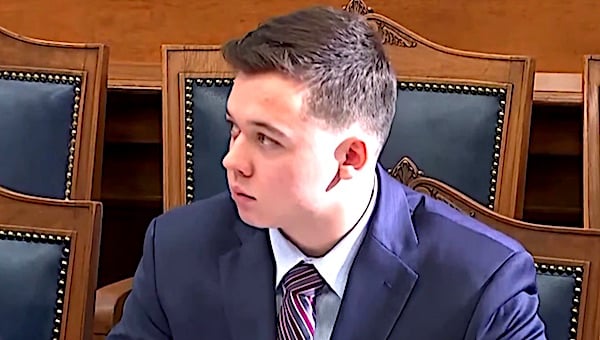 Wendy Rittenhouse, Kyle Rittenhouse's mother, is slamming Joe Biden for "defam[ing]" her son as part of his political attacks on President Trump.

The younger Rittenhouse is on trial in Wisconsin for shooting and killing two violent protesters during a riot in Kenosha, and shooting and wounding a third. He's accused of murder but the jury, which is to start deliberating on Monday, heard even prosecution witnesses outline the scenario as self-defense.

But Biden had, back in September, posted a video in his attacks on President Trump that accused him of failing "disavow white supremacists." It included a brief exchange with television personality Chris Wallace bullying Trump by telling him to "say it" about "white supremacists."

Biden's video included an image of Kyle Rittenhouse in the streets of Kenosha interspersed with images of white protesters in Charlottesville and Portland.

There’s no other way to put it: the President of the United States refused to disavow white supremacists on the debate stage last night. pic.twitter.com/Q3VZTW1vUV

"When I saw that I was shocked, I was angry. President Biden don't [sic] know my son whatsoever, and he's not a white supremacist. He's not a racist. And [Biden] did that for the votes. And I was so angry for a while at him and what he did to my son, he defamed him," Wendy Rittenhouse said.

She had driven her son to Kenosha, Wisconsin, on Aug. 25, 2020, during riots that developed there after police shot and injured Jacob Blake, a suspect they had confronted.

Rittenhouse has explained he was there to help protect property from the arsonists in the crowd of rioters.

But testimony suggested he was targeted or threatened by several protesters, and he shot them when they were pursuing him.

Fox reported, "Wendy said when she watched the tape shown at trial, 'I see this man trying to kick my son in the face …. When I look at the video with that guy pointing a gun to my son's head, I thought: he was going to die.'"

"The judge is very fair. The people that I talked to that lived in Kenosha all their lives. They told me that Judge Schroeder is a very fair judge and he doesn't allow no nonsense [sic] in his courtroom," she said.

The judge, in fact, has clashed a couple of times with the prosecutor, Assistant District Attorney Thomas Binger, including once for asking witness Drew Hernandez, who recorded the riots, about his decision to retain a lawyer for providing video footage as evidence.

Hernandez had testified that Rittenhouse attempted to defuse tensions.

Then the prosecutor was scolded for raising the issue that Rittenhouse chose to remain silent after he was charged. The Fifth Amendment protects those accused of crimes from incriminating themselves – they do not have to reveal any information to police, prosecution, or a judge.