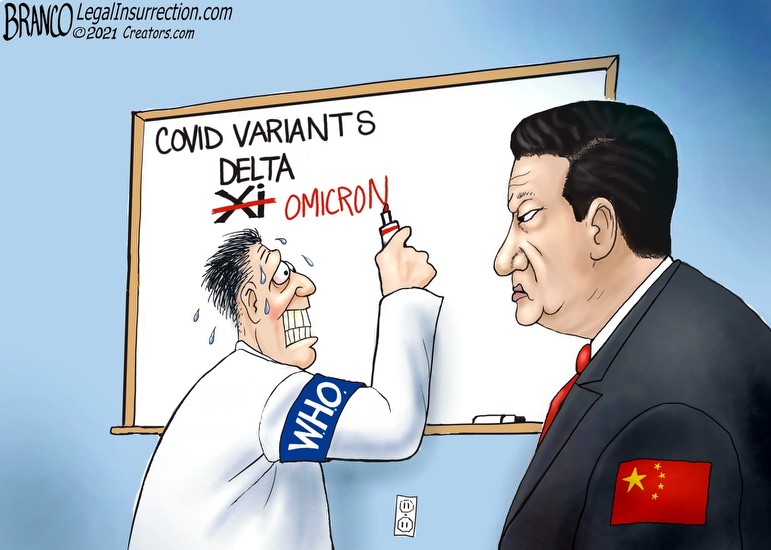 The World Health Organization, a lackey for the Chinese, skipped the Greek letter "Xi," as in President Xi Jinping, and chose "Omicron" as the name of the newest COVID variant, to avoid "stigmatizing a region."

For scientists, emergence of the variant likely raises concern around the mutation and effect of the virus, but for Greek alphabet fans, it raises the question, how did we get from "Mu" to "Omicron"?

According to Paul Nuki, the Global Health Security editor for the Telegraph, an anonymous WHO source has confirmed the letter "Xi" was skipped to "avoid stigmatizing a region."

It is seemingly the case that the "region" the WHO hopes to preserve from "stigmatization" is President Xi, the strongman of China.

The same Telegraph source also confirmed "Nu" was skipped because it sounds like "new," and allowing society to refer to a mutated virus as "new" sounds unacceptably innocuous.

This is hardly the first time the WHO has covered for China. There is a now viral clip of a senior adviser to the WHO dodging a question that would validate the very existence of Taiwan. The interview took place last year when Hong Kong's RTHK spoke with Dr. Bruce Aylward, a Canadian physician, former assistant director-general at the WHO and a current senior adviser.

In addition to denying the existence of Taiwan, Aylward was also seen in a clip shared by Chinese media saying Beijing knew what it was doing, and "if I had Covid-19, I'd want to be treated in China."

The current WHO director-general, Dr. Tedros Adhanom Ghebreyesus, is also profoundly compromised by China. According to the BBC, "While Dr. Tedros may be political, a lot of that political effort seems to be spent reassuring authoritarian, opaque governments, in a bid to get them to work with the WHO to tackle diseases which threaten global health."

Tedros and the WHO actively downplayed COVID, as noted in The Hill: "From the outset, Tedros has defended China despite its gross mismanagement of the highly contagious disease. As the number of cases and the death toll soared, the WHO took months to declare the COVID-19 outbreak as a pandemic, even though it had met the criteria of transmission between people, high fatality rates and worldwide spread."

To summarize, the World Health Organization is a compromised organization, beholden to an authoritarian dictator who is petty enough to apparently ensure that the letter "Xi" was skipped to protect himself from any blame for the virus. Skipping over the letter signifies the deep influence of China over the organization.

It signifies that the WHO is willing to employ social justice jargon around "stigmatization" to defend a regime that sends Muslim Uighurs to concentration camps.

If the WHO bureaucrats are suddenly in the business of avoiding stigmatizations, they can start with a new naming system that doesn't commit "cultural appropriation" against the Greeks.

In other news, Moderna Chief Medical Officer Paul Burton said Sunday the vaccine maker could roll out a reformulated vaccine against the omicron coronavirus variant early next year.

What? Already? How fast is that? It makes all the chatter about finding yet another variant "convenient." Would you take the shot?

It's not clear whether new formulations will be needed, or if current COVID vaccinations will provide protection against the new variant that has begun to spread around the globe.

"We should know about the ability of the current vaccine to provide protection in the next couple of weeks, but the remarkable thing about the MRNA vaccines, Moderna platform is that we can move very fast," Burton said on BBC's "Andrew Marr Show."

"If we have to make a brand new vaccine, I think that's going to be early 2022 before that's really going to be available in large quantities," the Moderna chief added.

Omicron has been classified as a "variant of concern" by the World Health Organization, meaning it is more contagious, more virulent or more skilled at evading public health measures, vaccines and therapeutics. The variant contains 30 mutations to the spike protein that allows the virus to enter the body. Officials have warned that many of these mutations could lead to increased antibody resistance and transmissibility, which could limit the effectiveness of existing COVID vaccines.

Current vaccines could provide some protection, depending on how long ago a person was injected, Burton said. Still, he said unvaccinated people should get vaccinated or receive their booster shots, if eligible.

Sounds like the fix is in. It's another form of what Donald Trump dubbed "the China virus."