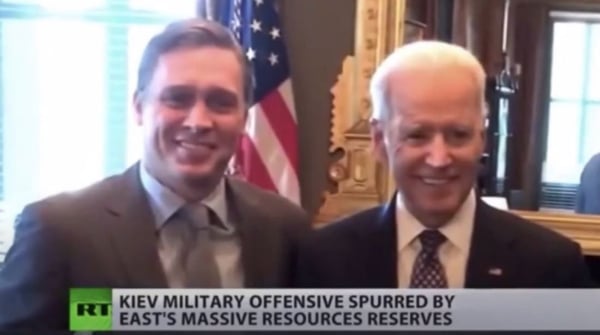 The Supreme Court has let stand a conviction for securities fraud against Devon Archer, the onetime partner of Hunter Biden who also served on the board of the Ukrainian gas company Burisma while Biden was collecting tens of thousands of dollars a month for his presence there.

The Associated Press confirmed Monday the high court was not taking an appeal from Archer.

After his conviction, a federal judge had set aside the conviction against Archer, but an appeals court reinstated it.

The scheme was described as having involved an attempt to defraud the Oglala Sioux Indian tribe regarding the sale of $60 million in bonds, and Hunter Biden apparently was not involved, but the report explained, "participants in the fraud invoked his name to enhance their credentials."

Archer and Hunter Biden had been involved in a business venture together several years ago, and both served on the board of Burisma at the same time.

It was Burisma that provided Hunter Biden – and his father Joe – one of the many scandals involving the First Family.

Hunter Biden was being paid tens of thousands of dollars a month to be on the board of Burisma – even though he had no experience in the industry.

But what he did have was a father, who as vice president for Barack Obama was handling the U.S.-Ukraine policy at the time.

Joe Biden was frankly open about his efforts to benefit his son's activities.

He met, as vice president for Barack Obama, with Ukrainian officials when Burisma was under investigation for corruption, and he returned home to brag about how he threatened the nation with withholding $1 billion in American aid if they didn't get rid of the prosecutor.

The New York Post noted it was during 2020 that the conviction against Archer was reinstated.

The Burisma escapade was just one of many involving Hunter Biden, and touching Joe Biden too, based on reports the two shared expenses as well as bank accounts on many projects.

The Daily Signal recently reported that emails found in a laptop computer Hunter Biden abandoned at a repair shop reveal that Joe and Hunter, who have said they never discussed the son's private business deals, discussed opportunities and plans.

The laptop also has revealed multiple other scandals, ranging from Hunter Biden's drug-fueled time with prostitutes to his massive payments from foreigners. Lately, he's been selling amateur pieces of artwork from prices ranging up to $500,000, which has prompted critics to warn it's just a way for outsiders to buy influence in Joe Biden's White House.

The details read like a spy thriller, with mention of a 2.8-carat diamond a business interest sent to Hunter Biden.

Archer actually joined the board of Burisma at the same time as Hunter Biden.

The Daily Signal reported it was in April 2014 that Hunter became a board member for Burisma with at least $50,000 per month compensation, and $83,000 by some accounts.

It came only months after Hunter was discharged from the U.S. Navy Reserves after testing positive for cocaine.

Burisma’s board chairman, Alan Apter, claimed, “This is totally based on merit."

Bob Unruh
Bob Unruh joined WND in 2006 after nearly three decades with the Associated Press, as well as several Upper Midwest newspapers, where he covered everything from legislative battles and sports to tornadoes and homicidal survivalists. He is also a photographer whose scenic work has been used commercially.
LGBT ambassador insults Christians as bearded Virgin Mary
Urgency rising for those Biden left behind in Afghanistan
Suspect in rampage that left 6 dead, dozens hurt, feels 'demonized'
CIA claims briefing President Trump 'most difficult' in decades, but …
Biden restores President Trump's 'Remain in Mexico' policy
See more...