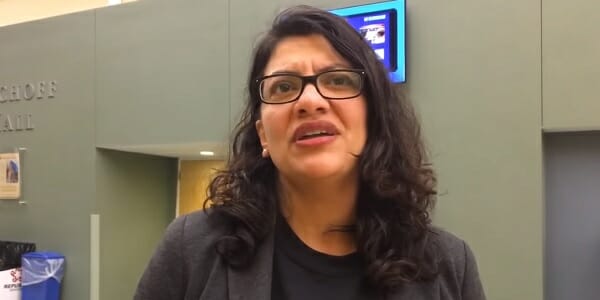 Democratic Michigan Rep. Rashida Tlaib brushed off questions related to the potential for human traffickers and other dangerous criminals to be released from prison as a result of a bill she endorsed in an interview released Sunday.

“The BEATHE Act proposes emptying federal detention facilities within ten years,” Axios’ Jonathan Swan told Tlaib in the interview. “To what extent have you wrestled with any potential downsides of releasing into society every single person who’s currently in a federal prison?”

Tlaib responded that people falsely think that far-left politicians want to “release everybody,” but Swan countered that such language was essentially what the bill said. “Yeah, but did you see how many people are mentally ill that are in prison right now?” Tlaib replied.

When Swan pressed Tlaib on the fact that human traffickers were in the federal prison system, Tlaib replied, “oh, I know,” before denying that she “blanketly” supported all criminals being released simply because she wants to reform the prison system.

“Look at who’s in prison now … look at the folks that are mentally ill who have substance abuse problems,” Tlaib said. “Why aren’t you asking me about them? You’re asking me about the … human traffickers and others who should be able to be held accountable.”

Tlaib emphasized that the bill started a process that would take 10 years, if passed, with its main objective being to figure out how to “get away from mass incarceration.”

The Michigan congresswoman said that she thinks prison system is “supposed to be rehabilitation,” but she later lamented that purely rehabilitative efforts are practically nonexistent in prisons. Swan asked Tlaib if she thought all people could be rehabilitated.

“I don’t think so,” she responded. “I’ve been very clear about that.”

“As somebody that has worked in the legal field and others, I don’t even know if our society would even know how to … rehabilitate every single person that wants to harm people,” she added. “I can tell you that, what’s struggling, for me, is seeing … the statistics about so many people that at a very young that are in there that probably would not have been in there but for the fact they were struggling with mental illness or other issues within their family life.”

When pressed on whether she believed there were any people, however small, that did need to be “behind bars,” Tlaib said she would need to look at every individual case in order to have an answer.