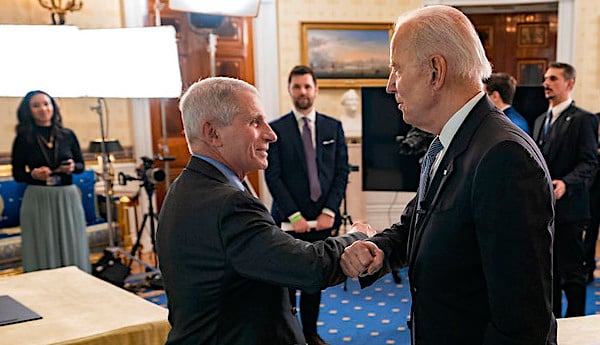 President Joe Biden participates in a Q&A townhall with Chief Medical Adviser to the President Dr. Anthony Fauci on Monday, May 17, 2021, in the Blue Room of the White House. (Official White House photo by Adam Schultz)

Critics of White House coronavirus adviser Dr. Anthony Fauci's handling of the pandemic and the power he wields over government policies can't be faulted for reading a joke by President Biden on Thursday through the lens of Dr. Freud.

"I've seen more of Dr. Fauci than I have my wife," Biden said. "We kid each other. Look, who's president? Fauci!"

After drawing laughter from the audience at National Institutes of Health headquarters, Biden added: "But all kidding aside, I sincerely mean it."

Meanwhile, a number of Republican lawmakers have called for Fauci's removal as Biden's chief medical adviser.

Sen. Tom Cotton, R-Ark., said earlier this week on Twitter that Fauci "is nothing more than a Democratic operative."

"If President Biden were serious about the pandemic, he'd fire Fauci and replace him with a public health professional," the senator said.

Fauci, the director of the National Institute of Allergy and Infectious Diseases since 1984, declared in a "Face the Nation" interview Sunday in response to criticism that he has been wrong about many issues related to the pandemic that he "represents science," that criticism of him is criticism of science itself.

Last week, Fauci charged in an MSNBC interview that Fox News host Tucker Carlson and former Trump trade adviser Peter Navarro are "killing people" with "lies" about him and the pandemic.

"The praise or the arrows and slings are really irrelevant. I do what science drives you to do," he said.

Navarro, in his new book "In Trump Time, A Journal of America's Plague Year," writes that Fauci did "more damage to this nation, President Trump and the world than anyone else this side of the Bat Lady of Wuhan."

Fauci, charges the former Trump aide, is responsible for "everything from the Wuhan lab gain-of-function catastrophe and suppression of low-cost therapeutics such as hydroxychloroquine and ivermectin to the political, partisan and deadly delay in delivering the Trump vaccines to the American people."

Dr. Scott Atlas, who briefly served as a member of the coronavirus task force during the Trump administration, said in a recent interview with Tucker Carlson that he was astonished at the "lack of knowledge about the data" displayed by Fauci and other members of the team.