In October, I took a rare trip to the city (two hours away) to pick up a valuable item: field fencing. Specifically, six 330-foot rolls of 47-inch 14-gauge field fencing. This was not a frivolous purchase, but a serious infrastructure investment to enclose the pastures here on our new homestead in preparation for getting cows in the spring. Getting cows is part of our strategy to circle the wagons and become more self-sufficient. 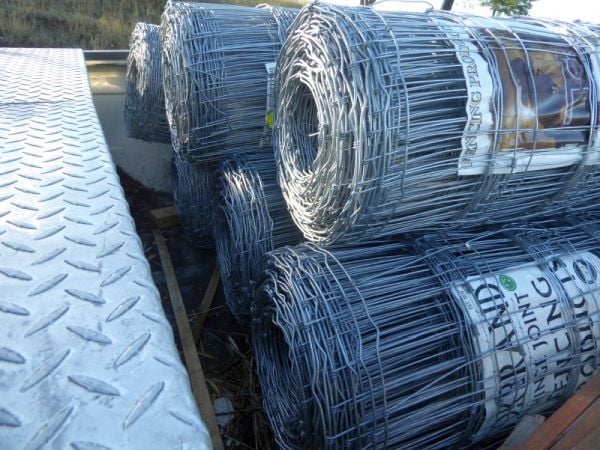 We already had four 330-foot rolls we purchased last December, but in the 10 months between one purchase and the next, the price of each roll doubled. Read that again: the price doubled. We don't plan to install the fencing until spring, but we figured we'd better buy it now while we could still afford it. Y'know, before the prices double again. People are calling these skyrocketing price increases "Bidenflation."

It seems we are not alone with this sense of fiscal urgency and the impulse to make necessary purchases before items become unaffordable. A recent article entitled "Retail frenzy to buy ahead of Bidenflation" relates the retail boom that's taking place all across the country, calling this type of behavior "common in developing economies where hyperinflation is just a fact of life."

Democrats are trying to spin this retail boom in a positive light – the economy is better! See how much people are spending! White House press secretary Jen Psaki actually claimed inflation is a "good thing" for Americans: "Now more people have jobs. More people are buying goods. That's increasing the demand."

NBC's Stephanie Ruhle says the "dirty little secret" of people complaining about paying higher prices for food and fuel for their homes is they can afford it just fine. According to her, stocks look good and people should have been saving money during the pandemic anyway.

An MSNBC opinion columnist named James Surowiecki suggested the media have been fearmongering over the consequences of inflation Americans have been facing. He claims "consumers are, relatively speaking, flush, and it's that strong demand for goods and services that is sending prices higher," and "The inflation we're seeing is not, then, some mysterious affliction that's descended on the economy. It's the predictable product of the economy's rapid recovery, and its costs have been offset, to a large degree, by robust wage growth and government policies."

So in that light, buying rolls of field fencing now instead of later is the sign of a strong economy, not a desperate attempt to beat rising prices.

Bidenflation is a type of war, isn't it? But it's a war the little people lose by default. Those of us with a modest income aren't seeing that income increase so we can buy field fencing without breaking the bank. Those who commute aren't seeing their income increase to cover the cost of gas, now 60% more expensive than it was last year. No, we're just told by the elites to shut up and sit down, you ungrateful peasants; this is the New Normal.

I don't know if any analyses have been done about whether this "retail boom" consists of purchasing unnecessary goods such as electronics or fancy clothes, or of necessary items such as field fencing and lumber. But according to one article, "A recent CBS/YouGov poll indicated drastically reduced consumer confidence statistics, due in large part to increased consumer prices and other troubling economic statistics: 78 percent of Americans planned to cut back on holiday shopping, while another 80 percent planned to delay purchasing big-ticket items."

I dunno, do six rolls of field fence constitute a "big-ticket item"? Because I can assure you, it certainly felt like it to our bank account. In reality, I suspect most people are doing what we're doing: buying critical things we need now before prices skyrocket further. Trust me, this behavior is NOT the sign of a healthy economy.

Despite all the pretty words from the Brandon administration about how they feel our pain, the Commerce Department just raised tariffs on Canadian lumber, which will spike construction costs even higher, strain an already strained housing market further, and cause yet more hardships and price increases on down the supply chain. U.S. sawmills can't meet domestic demand as it is, and since Canadian lumber has traditionally backed U.S. output, the result will mean higher prices amid a more limited supply. I'm all in favor of bringing manufacturing back within American borders, but not until we can ramp up the necessary infrastructure to support it. Otherwise it does nothing but create hardship. Why did the Brandon administration do this? There is literally no good reason except to do as much damage as they can to the economy and screw the American people.

Meanwhile the mainstream media give us condescending tips on how to cope with rising prices: Forgo the turkey. Drop a few people off your Thanksgiving guest list. Who cares if energy costs for home heating are rising by 50% this winter? Suck it up, buttercup.

Americans are facing this cruel tax of inflation alone. We certainly can't look to the government to solve the issues it created – our leaders are useless. "President backs out of supply chain speech last-minute as nation waits for leader to lead," noted a recent Fox News article. Biden also claims supermarket shelves are "well stocked," even as meat producers are jacking up prices, and grocers ration food and get creative with their displays to cover the shortages.

What? You mean the current rate of inflation is NOT "transitory"? I'm shocked. Shocked! Trying to convince us Bidenflation doesn't exist or is beneficial to the economy is gaslighting at best and evil at worst. Either the Biden administration is stupid, or it thinks we are.

So, since it's statistically unlikely prices will ever go down, my husband and I are discussing what else we can do to "boost" the economy by purchasing critical farm infrastructure materials before they're priced beyond our reach – things like lumber, hardware, drip irrigation equipment, deer fencing … in other words, things of real value, not silly stuff like big-screen TVs or personal electronics.

So here's my advice as we enter the festive season of the year: Boost the economy. Buy what you need NOW. Not necessarily what you want, but what you need – before prices double. Now is the time to think in terms of metaphorically circling the wagons and becoming more self-sufficient.