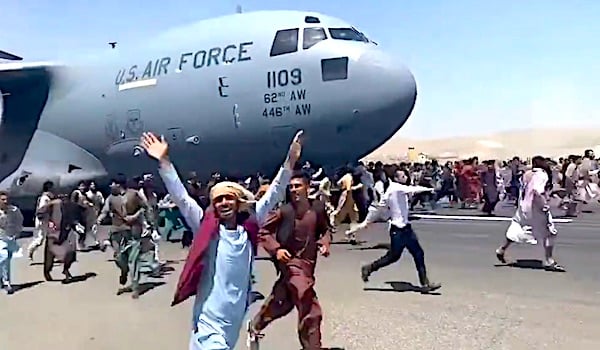 A deadline set by Congress for Joe Biden to reveal details of U.S. work to evacuate those stranded in Afghanistan by his disastrous pullout of American troops apparently has been ignored.

The Washington Examiner reported Biden failed to meet a deadline for disclosing the breakdown of where the Afghanistan evacuation stands.

WND reported only last week that Human Rights Watch had confirmed many former police and intelligence officers left behind by Biden are being hunted down and executed.

The terrorists in the Taliban, who took over the country following Biden's removal of American troops, had announced "amnesty" but the HRW's "'No Forgiveness for People Like You,' Executions and Enforced Disappearances in Afghanistan under the Taliban" report confirmed at least 100 dead so far.

And that was just from four provinces alone.

"The Taliban leadership’s promised amnesty has not stopped local commanders from summarily executing or disappearing former Afghan security force members," explained Patricia Gossman, associate Asia director at Human Rights Watch. "The burden is on the Taliban to prevent further killings, hold those responsible to account, and compensate the victims’ families."

Now the Examiner pointed out a continuing resolution approved by Congress and signed by Biden last September required that by Nov. 29 Biden was to provide details of Operation Allies Welcome, the effort to evacuate Americans and others who support the U.S. from Afghanistan.

The Examiner documented that a lawmaker on the Senate Homeland Security and Governmental Affairs Committee confirmed no information has been provided.

"The Biden administration was required by law to report to Congress by November 30 on the composition and vetting of the Afghan evacuees — including who actually got on our planes and just how many special immigrant visa holders, and others who helped U.S. forces and our allies over the last 20 years were left behind. It has failed to do so," Sen. Rob Portman, a Republican, explained.

"The feckless nature of evacuation of Afghans has put our national security at risk, and I am troubled by the administration’s lack of responsibility or accountability on this issue,” Portman said.

The government funding law, H.R. 5305, required a report at 60 days after the enactment date breaking down how many Afghans are in the U.S., how many evacuees are at U.S. bases overseas and the number of lawful permanent residents, visa holders and others.

Those lists were to include those given special permission and protection from the U.S. for helping during its occupation and reconstruction efforts in Afghanistan.

The costs of the entire situation also were to be disclosed.

The Examiner noted the Biden administration's failure to report who was evacuated follows confirmation that thousands of those individuals brought to the U.S. were not investigated for their possible terror links or anything else.

WND has reported, too, that Mullah Nooruddin Turabi, who previously served as the Taliban’s justice minister and is now serving to enforce its extreme interpretation of Islam, told the Associated Press that the country will be ruled under strict Islamic law and return to executions and cutting off hands.

Besides the people Biden left behind, he also left some $80 billion worth of American war machinery for the Taliban to have.

Biden administration officials reportedly now have been working on a database of service members' families and others who still may need to be rescued.

A commentary from the New York Post accused Biden of telling "neverending lies" about those he abandoned.

"Before his utterly botched Aug. 30 withdrawal of American troops from Afghanistan, President Biden made a solemn vow: 'If there are American citizens left, we’re going to stay until we get them all out,'" the commentary said.

"Not only did he break that promise, we’re still learning just how badly he failed: Thousands upon thousands remain stranded," it said.

It cited Foreign Policy magazine "that the State Department believes as many as 14,000 United States legal permanent residents remain in Afghanistan."