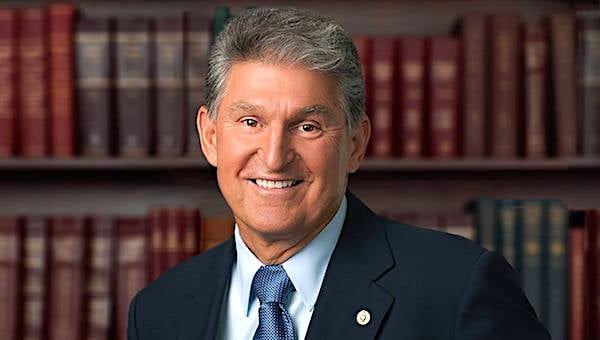 Joe Biden's multi-trillion dollar spending plan, with its giveaways on green energy projects, child care and other social welfare programs, appears to be on the rocks – at least for the rest of this year, as Sen. Joe Manchin, D-W.Va., is holding his line on spending.

The Democrats' agenda, of course, was to have it in the law months ago, but with a 50-50 party split in the Senate, they have to have every single vote to move it forward, and Manchin repeatedly has expressed concerns over the inflationary pressures from the massive spending program, as have a few others.

Democrat leaders, up to and including Biden, have been unable to reach a compromise and now the Washington Post reports the plan is "in political peril."

The Daily Mail abandoned any effort to describe the situation as salvageable, headlining, "Manchin KILLS Biden's hopes of passing Build Back Better this year: Schumer punts president's flagship $1.75T to next year after failing to get enough support in the Senate."

The Post report explained the "gaps" between the two sides were "immense," with one of the major fights focusing on the Democrats' expanded child tax credit, a program that has for months had the government sending monthly checks to families with children.

Those payments are set to expire at the end of the year, and many Democrats have been insistent that those have to be continued.

"But their urgent requests do not appear to have budged Manchin, who previously has expressed general skepticism about approving aid that sends more checks directly to Americans," the report said.

The Post noted the "political divide" between Biden and members of his own party on his agenda to radically rebuild America's health care, education, climate, immigration and tax laws.

It is this huge spending program that Biden repeatedly has claimed will cost "zero" dollars, despite a CBO report this week that confirmed it could add $3 trillion to the nation's debt.

Sen. Chuck Schumer, D-N.Y., repeatedly has claimed that the vote on the legislation can happen soon, as has Biden.

But behind the scenes, it's apparently a war, the Post reported.

"A longtime holdout on the package, Manchin for months has maintained concerns that Democrats are spending too much, and too quickly, potentially compounding the risks of inflation at a time when prices are rising at a rapid clip. He successfully negotiated down the party’s original package from its initial $3.5 trillion price tag earlier this year, frustrating liberal lawmakers," the report explained.

Lately, Manchin has lobbied for his party to hit pause on the process.

The Daily Mail said on Wednesday Schumer was prepared "to punt" the matter into next year, and instead focus on the party's agenda to take control of all elections in the nation.

The party's Freedom to Vote Act & John Lewis Voting Rights Advancement Act are pending, even after an earlier version of an election takeover plan failed dramatically.

Politico reported Biden's party is "desperately" trying to avoid ending the year stalled on both issues.

Sen. Raphael Warnock, D-Ga., said in the report that, "Voting rights should be the very next thing we do."

But Politico warned, "Manchin is not yet committed to the $1.7 trillion climate and social safety net legislation, nor does he support changing the Senate rules to push through an elections bill on a simple majority."

No Republican senator is expected to support either of Biden's radical plans.

Bob Unruh
Bob Unruh joined WND in 2006 after nearly three decades with the Associated Press, as well as several Upper Midwest newspapers, where he covered everything from legislative battles and sports to tornadoes and homicidal survivalists. He is also a photographer whose scenic work has been used commercially.
See powerful new Trump speech banned from YouTube
Biden bizarrely claims 8.5% inflation actually is 'a number: zero'
'When you jail your political opponents, it's easy to stay in office'
'Slap in the face': Pro-life Americans urged to boycott this major retailer
Oops! Jan. 6 committee backfiring in spectacular way on Democrats
See more...