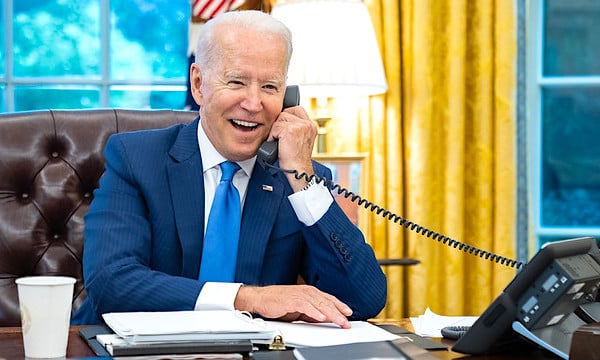 President Joe Biden talks on the phone with James Murray, director of the U.S. Secret Service on Monday, July 12, 2021, in the Oval Office of the White House. (Official White House photo by Adam Schultz)

"By any means necessary" is a phrase that has been used over the years by extremists in pursuit of their goals.

Essentially, it's understood to be a determination that any measure, including violence, is justified to reach the goal.

That's now the position Joe Biden has adopted regarding the Democratic Party's plans to take over elections all across the United States.

With that power, Democrats in Washington could control mail-in ballots, illegal alien voting, voter registration lists, who is recruited to vote and even who counts the vote.

But it's been held up because of the Senate's long-standing filibuster rule that requires legislation – except in rare circumstances – to obtain 60 supporting votes before moving forward.

The Senate is 50-50 between the parties now, so Kamala Harris has to trot over to the Senate when it's deadlocked and vote for the Democrats' agenda, and that's how Biden suggests the takeover of elections now happen.

Fox News said he now supports doing "whatever" is needed to get his party's agenda put into law.

EXCLUSIVE: Pres. Biden to @DavidMuir: "If the only thing standing between getting voting rights legislation passed and not getting passed is the filibuster, I support making the exception of voting rights for the filibuster." https://t.co/yllwPKA5RO pic.twitter.com/Xbi2ijWQjA

The immediate reaction from the Wall Street Journal's editorial board, however, was, "An 'exception' to the filibuster? This is like an engineer saying he merely wants to remove a section of the Hoover Dam."

He said, "The reason the Democrats want to get rid of the filibuster is they want to admit two new states, the District of Columbia and Puerto Rico, and pack the Supreme Court and fundamentally change the structure of America forever."

And other Republicans have charged the plan is nothing more than a power grab for Democrats.

Sen. Chuck Schumer, D-N.Y., the Senate majority leader, has promised to force a vote on the rule change soon.

His problem, however, is not the 50 Republicans who are expected to vote against it, but whether two of his own party, Sens. Joe Manchin and Kyrsten Sinema, will.

They both have opposed the idea.

McConnell explained, "The filibuster prevents extremism… and I admire and respect Senator Sinema and Senator Manchin for saying they are not changing it."

WND reported only days ago that leftists in Congress have been insisting that, since they don't have the votes to push their plans through, Biden should simply impose their agenda by executive order.

"Today, the elected leadership of the Congressional Progressive Caucus is calling on the president and all Democrats who believe in the need to Build Back Better for climate, care, immigrants, and those seeking economic dignity and opportunity to come together and deliver for the American people," the coalition charged in a statement that came after Manchin declined to support Biden's massive spending spree.

"That means a whole-of-government approach. In Congress, we will continue to prioritize a legislative path for Build Back Better… In the meantime, the White House must continue to act on a parallel track by using the president’s incredibly powerful tool of executive action."

Further, WND reported a few months back that while Democrats historically have supported the rule, the current situation in Washington has caused them to flip on the issue.

Constitutional expert Jonathan Turley wrote that as a senator, Biden defended the filibuster.

"The Senate ought not act rashly by changing its rules to satisfy a strong-willed majority acting in the heat of the moment," Biden said in 2005.

"Proponents of the 'nuclear option' argue that their proposal is simply the latest iteration of a growing trend towards majoritarianism in the Senate. God save us from that fate, if it is true," Biden said. " … Adopting the 'nuclear option' would change the fundamental understanding and unbroken practice of what the Senate is all about. Senators would start thinking about changing other rules when they became 'inconvenient.' … Altering Senate rules to help in one political fight or another could become standard operating procedure, which, in my view, would be disastrous."

NPR reported Schumer is "threatening" the Republicans, insisting they either compromise or Democrats will eliminate the filibuster. In response, McConnell has warned that Republicans would bring a "nuclear winter" on the Senate floor.

The rule has been changed several times. The threshold was reduced from 67 votes to 60 in 1975. Democrats eliminated it in 2013 for votes on executive branch and judicial nominations. In 2017, the GOP expanded the Democrats' changes to include Supreme Court justices.