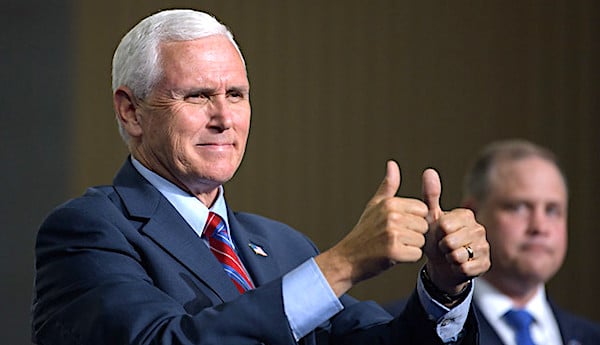 Pence made the remark to supporters Wednesday afternoon at Heritage Action for America’s “Save Our Paychecks” event in Manchester, New Hampshire.

The former vice president heavily criticized the Biden administration’s sweeping $1.9 trillion spending bill—the “Build Back Better” plan—promising that it will be “an unmitigated disaster for American families and American workers.”

The Congressional Budget Office has estimated that over the next 10 years, the plan would increase the deficit by $367 billion, “not counting any additional revenue that may be generated by additional funding for tax enforcement.”

“President Biden’s policies are threatening to send our nation back to the anemic economic growth that we were experiencing at the height of the pandemic,” said Pence.

“And I came to say: We’re not going to let it happen,” he told supporters amid applause.

Pence said that “nobody is rooting harder” for the Build Back Better legislation than China.

“President Biden’s plan literally puts China first and America last,” he said, quipping that “I think you could actually call it the ‘Build Beijing Back Better’ bill.”

“China stands to gain thousands of jobs as employers flee the crushing tax burden by this plan,” Pence said.

“Don’t just take my word for it,” he continued. “The National Association of Manufacturers estimated that Biden’s tax hike could destroy as many as 1 million American jobs. So, it’s about jobs. It’s about our families. It’s about taxes and spending, really about our future.”

The former vice president joined Heritage Action Executive Director Jessica Anderson on the last stop of the Save Our Paychecks tour after a slew of New Hampshire activities, including posing for pictures and buying a slice of cake at a local bakery.

“Vice President Pence made it clear that he understands the struggles that families in New Hampshire and in states across the country are facing right now under Biden’s ‘Build Back Broke’ agenda,” Anderson told The Daily Signal. (The Daily Signal is the news outlet of The Heritage Foundation.)

“Like he said, there is no force more powerful than the voice of grassroots Americans, and we are ready to stand up to the big-government socialists in Washington,” she continued. “Heritage Action and our 2 million conservative activists are proud to have such a fighter in our corner.” (Heritage Action for America is the grassroots partner organization of The Heritage Foundation.)

Pence became a grandfather this year, he told those in attendance. The former vice president said he has always been a fiscal conservative and worried about the debt piling up for future generations, but now, looking his baby grandchild in the eye, he worries even more about what the future holds.

“I know we’re really choosing, as we stand here today, between two futures in this country,” he said. “One future built on freedom, prosperity, limited government, less taxes and competitive American economy. And the other built on big-government socialism, less freedom, more taxes, more dependency, and American decline.”

“This far and no farther,” he warned the Biden administration, calling on the people of New Hampshire and anyone looking on to “shut down the big-government socialist agenda right now before it shuts down the American economy.”

“You know, we’ve all been through a lot over the last two years,” Pence said. “A global pandemic, social unrest, a divisive election and tragic day in our nation’s capital. And over the last nine months, a new administration intent on transforming our nation into a European-style welfare state, more government and less freedom.”

“But today I want you to be encouraged, because I am,” he added. “As I travel around the country, I’ve never seen the level of enthusiasm that I’ve seen in the American people, I truly do believe are freedom-loving people.”

The former vice president stressed that he has faith in the American people that they will do what they can to stop the Biden administration’s plans before it’s too late.