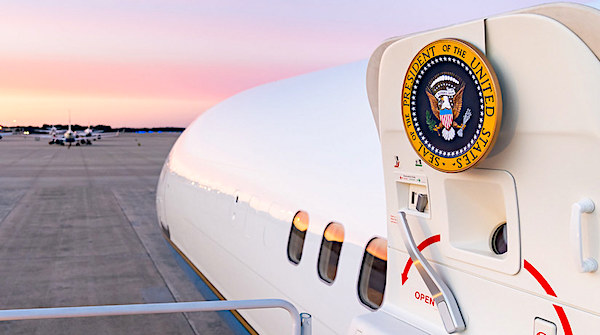 The presidential seal is seen on the open door of Air Force One at Joint Base Andrews, Maryland, Friday, Sept. 10, 2021. (Official White House photo by Adam Schultz)

Joe Biden's recent online democracy summit did not happen without controversy, as he's been accused of cutting the feed of a Taiwanese speaker to appease the communists in China.

But now those very communists have attacked the events as America's attempt to use a "weapon of mass destruction," or "democracy," against the rest of the world.

A report from the Middle East Media Research Institute explains the Chinese Foreign Ministry reacted to Biden's online events by charging that "the U.S. had turned 'democracy' into 'a tool and a weapon' to preserve its worldwide 'hegemony,' and that 'American-style democracy' is rife with 'malaises.'"

It said, "Whether a country is democratic or not should be decided by its own people, not by a handful of finger-pointing outsiders. A country's democratic system and its path to democracy should be chosen independently by its own people in light of their national reality. Nothing works better than the most suitable."

"Democracy," the report said the communist statement accused, "has become a 'weapon of mass destruction' used by the U.S. to interfere in other countries' affairs."

The statement accused the event of seeking "to thwart democracy under the pretext of democracy, incite division and confrontation, and divert attention from its internal problems."

The communists claimed: "The American-style democracy is a money-based game for the rich. Ninety-one percent of congressional elections are won by candidates with greater financial support. It is 'one person one vote' in name, but 'rule of the minority elite' in reality. The general public are wooed when their votes are wanted but get ignored once the election is over. The check and balance has become 'vetocracy,' [meaning 'rule by veto'] with partisan interests put above national development. The flaws of such an electoral system are self-evident, including the rampant use of gerrymandering to manipulate the division of electoral districts that compromises fairness and justice. The dysfunction of the American-style democracy is a fact that cannot be covered up — the Capitol riot that shocked the world, the death of George Floyd that sparked mass protests, the tragic mishandling of the COVID-19 pandemic, and the harsh reality of the rich becoming richer and the poor poorer."

It cited statistics, without a source, than said 72% of Americans think democracy in the U.S. is not a good example for others to follow, and 81% of Americans "believe that there are grave domestic threats to the future of American democracy."

Chinese officials said in the statement that they promote "democracy" in accordance with their own national conditions and realities.

'Save us!': China eases lockdowns as massive protests erupt across country