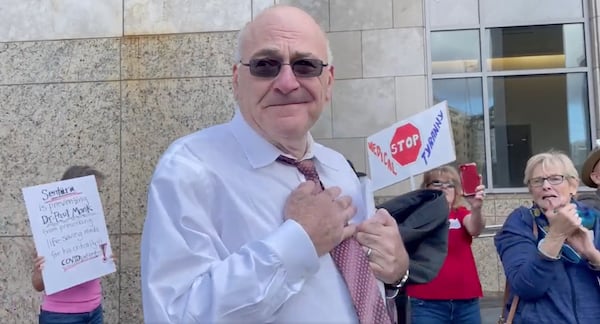 A physician and medical researcher who is suing his Virginia hospital for preventing him from treating COVID-19 patients with effective drugs that have become politically charged said his effort is on behalf of physicians across the United States and around the world whose relationship with their patients has been sabotaged.

Dr. Paul Marik, a professor at Eastern Virginia Medical School, said it's "completely outrageous" that the hospital in Norfolk where he serves as ICU director is telling physicians what they can prescribe and not prescribe, violating the doctor-patient relationship and the Hippocratic Oath.

Ultimately, he said, hospital administrators "who have limited or no experience with COVID, are telling an experienced clinician how to practice medicine."

And unfortunately, Marik, continued, his experience is "becoming widespread in the U.S. and across the world."

"So, I'm doing this, obviously because I had no option, and I'm doing this for doctors across the world and in the U.S.," he said.

"Because we need to bring medicine back to doctors."

Earlier this month, as WND reported, Marik was greeted by supporters outside a courthouse in Norfolk where he testified in his lawsuit to force Sentara Norfolk General Hospital to allow him to treat COVID-19 patients with off-label drugs, such as ivermectin.

Marik's lawsuit argues Virginia’s Advanced Directive statute gives hospitalized patients the right to choose what treatment they receive as long as a doctor determines it to be appropriate.

Sentara Healthcare said in a statement that it "follows evidenced-based protocols as recommended by trusted agencies including CDC, NIH, and FDA."

Marik acknowledged that the NIH doesn't recommend ivermectin for COVID-19 treatment, but he argued in an interview with a Norfolk TV station that "if you look at the statement these are guidelines and not rules, and the physician needs to use his clinical judgment on how to treat the patients."