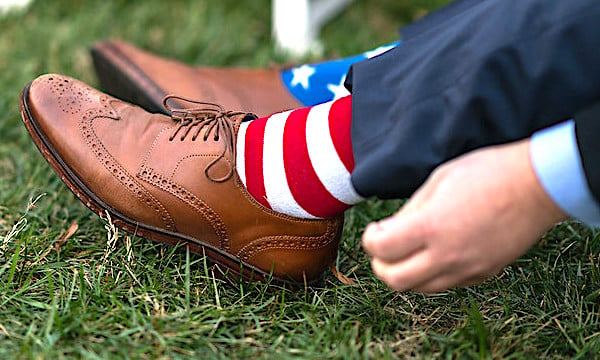 U.S. Rep. Cori Bush, D-Mo., this week proposed her political party open up a literal Pandora's Box by investigating members of the Republican Party, determine that they helped "incite" the Jan. 6 events at the U.S. Capitol, then voting to throw them out of office.

She wants to use a portion of the 14th Amendment that was adopted in response to the Civil War that forbids someone who has worked against the government of the United States to later hold an elected office. 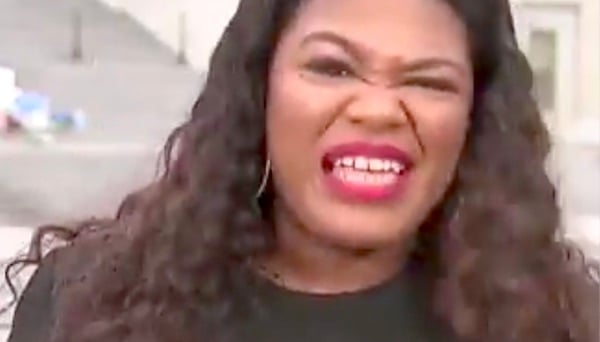 U.S. Rep. Cori Bush, D-Mo., reacts to a pardon given to the McCloskey family during an interview with CNN on Aug. 4, 2021. (Video screenshot)

The provision was raised earlier by Democrats who tried to impeach and remove President Trump from office – but failed in both of their attempts.

Analysts have explained the 14th Amendment hasn't been used in a century because it's unclear "who gets to decide" if a government official has engaged in inappropriate activity.

Further, Keith Whittington, a Princeton professor of politics, explained back then the provision "does not identify any mechanisms for determining whether an official has actually engaged in insurrectionist activities that would trigger the disqualification, and as a consequence it has not been used very much and it is not even clear what kind of mechanism would be constitutional."

He's the one who warned about the Pandora's Box, because if a simple majority – Democrats at this point – would vote for a lifetime ban on a former president, GOP members, when they are the majority, "could return the favor by voting to disqualify Democrats for expressing views on protests that turned into riots."

In a report carried by VOA News at the time, Whittington explained, "There is a great deal of obvious political risk in having the Congress just make such determinations by majority vote and potentially disqualifying from office members of the minority party with little evidence and through an entirely partisan political process."

Even Sen. Dick Durbin, D-Ill., said at the time that there was a problem because the amendment doesn't explain "how you determine whether someone participated in an insurrection."

In fact, while Democrats repeatedly have claimed last Jan. 6 was an "insurrection" against the federal government, those who were arrested on charges like trespassing and vandalism have not been charged with that offense.

President Trump has suggested that the actual insurrection was the manipulation of the 2020 presidential election by Mark Zuckerberg, who handed out $420 million to influence the results, and both legacy and online media, which suppressed accurate – and negative – reporting about the Biden family's foreign affairs just prior to the election. Studies have shown that had either one of those events not happened, President Trump would be in office today.

Salon reports Bush wants a resolution to "investigate and expel the members of Congress who helped incite the violent insurrection at our Capitol."

But in making that claim she revealed one of the issues: in this statement she is the one who is determining that it was an "insurrection" and who was involved.

Leftist media outlets even today continue to claim that President Trump and congressional Republicans lied about the 2020 election and encouraged the violence.

Bush's plan is backed by 54 other Democrats and demands the House Committee on Ethics "shall investigate, and issue a report on, whether any and all actions taken by members of the 117th Congress who sought to overturn the 2020 presidential election violated their oath of office to uphold the Constitution."

The call for Democrats to vote members of the Republican Party out of Congress has spread among leftist interests, including groups such as "Free Speech for People," which promoted a petition calling for the expulsion of those it deems guilty.

Several individuals from Lt. Gen. Michael Flynn to broadcaster Alex Jones and and U.S. Rep. Scott Perry, R-Pa., all have begun their own court action, or protest, denying the committee's authority.

They join a long list of others who already have sued, charging the committee is trying to abrogate the Constitution's First Amendment with its demands, and isn't even legitimate because it fails to meet the requirements of the authorizing resolution.

The committee, which is partisan because Pelosi refused to seat the GOP members selected by the minority party and instead recruited two anti-Trump GOP members, Liz Cheney of Wyoming and Rep. Kinzinger of Illinois, has issued vast and broad demands for statements, evidence, phone records, testimony and much, much more.

But now the Gateway Pundit documents that retired Lt. Gen. Michael Flynn has requested from a Florida court a restraining order against Pelosi and her committee.

While the court denied that request, the filing did explain, "General Flynn did not organize, speak at, or actively participate in any rallies or protests in Washington, D.C., on January 6, 2021, and he of course did not participate in the attack on the Capitol that day. Ex. A, Declaration of Michael Flynn ('Flynn Decl.') ¶ 5. Nevertheless, the Select Committee—assuming the role of shadow prosecutor for the January 6 attack and working in parallel with the actual prosecutors at the Department of Justice—has diverted its attention from its important work to target General Flynn for a quasi-prosecution that is either aimless or transparently partisan."

It continued, "Despite not participating in any public events in Washington on January 6, Defendants have issued General Flynn a sweeping subpoena seeking twenty different categories of documents and a demand that General Flynn appear for a deposition in Washington, D.C. The subpoena demands records of General Flynn’s communications about the 2020 election, and seeks to identify the basis for his beliefs and the persons with whom he associated, in addition to contacts with government officials. It thus constitutes a frontal assault on his 1st Amendment rights to freedom of speech, association, and petition."

"I stand with immense respect for our Constitution, the Rule of Law, and the Americans I represent who know that this entity is illegitimate, and not duly constituted under the rules of the US House of Representatives," he stated. "I decline this entity’s request and will continue to fight the failures of the radical Left who desperately seek distraction from their abject failures of crushing inflation, a humiliating surrender in Afghanistan, and the horrendous crisis they created at our border."

(1/2) I stand with immense respect for our Constitution, the Rule of Law, and the Americans I represent who know that this entity is illegitimate, and not duly constituted under the rules of the US House of Representatives.

(2//2) I decline this entity’s request and will continue to fight the failures of the radical Left who desperately seek distraction from their abject failures of crushing inflation, a humiliating surrender in Afghanistan, and the horrendous crisis they created at our border.

The committee chairman, Rep. Bennie Thompson, had accused Perry of having "multiple text and other communications with President Trump's former Chief of Staff regarding" Jeffrey Clark, as well as various "communications with the White House," in demanding his testimony.

If the committee moves forward as it has with other individuals, issuing subpoenas and then referring for contempt charges if they don't comply, it would put the Democrats into the "new territory" of voting to hold a sitting member of Congress in contempt.

And GOP members already have confirmed they essentially are taking notes on what Democrats, now in the majority, do to Republicans, as the GOP widely is predicted to become the majority as early as the election 11 months from now.

It was Politico that reported broadcaster Alex Jones has sued the committee to block members of obtaining his telephone records and compelling him to testify.

The filing asserted his Fifth Amendment rights against self-incrimination, and refusing what he described as the committee's attempt to obtain his documents.

"With respect to his deposition subpoena, Jones has informed the Select Committee that he will assert his First, Fourth, and Fifth Amendment rights to decline to produce the documents requested by the Select Committee, asserting that he engaged in constitutionally protected political and journalistic activity under the First Amendment, that the Fourth Amendment guarantees him a right of privacy in his papers, and that he is entitled to due process and the right to remain silent under the Fifth Amendment," the filing said.

Politico pointed out the committee already is facing "a flood" of litigation, including cases from John Eastman, a lawyer who has sued to protect his phone records. Also, Cleta Mitchell, a prominent conservative attorney who joined Trump's early January call with Georgia Secretary of State Brad Raffensperger, sued to quash a subpoena from the committee.

WND had reported on a new case against the committee from Ali Alexander, the national organizer of "Stop the Steal."

His charges include that the committee is illegitimate, because it never has complied with the resolution that created it, and its subpoenas are therefore irrelevant.

The case against Pelosi's "Select Committee" charges its members may not constitutionally "interrogate, threaten, intimidate, or chill the political beliefs of U.S. citizens."

The case was filed by lawyers Jonathan Moseley and Paul Kamenar, who is serving as Alexander's main attorney.

Moseley explained he was attorney of record, and that "Stop the Steal, LLC" was to encourage all responsible to address the concerns of millions of voters about how their votes were counted.

"'Stop the Steal' held many rallies and events in cities around the country over many months, without incident which were 100% peaceful. Stop the Steal never had any relationship whatsoever to any act of violence nor any goal of preventing the certification of the Electoral College vote," the statement from Moseley explained.

"The nation’s political class is gripped with a Salem Witch Trial like madness which is unable or unwilling to distinguish between approximately 50-250 people who were violent, and the exercise of free speech by hundreds of thousands of peaceful demonstrators," the statement said. "Hyper-ventilating articles confuse Ali Alexander as helping to organize the 100% peaceful and lawful demonstration at the Ellipse and Washington Monument because it 'preceded' some violence at the Capitol."

Earlier, WND had reported that the challenges to Pelosi's partisan committee included a lawsuit by a freelance photojournalist over a subpoena for all her records.

Just the News confirmed freelancer Amy Harris was suing the House committee over its "invasive and sweeping subpoena" of her telephone records.

Pelosi's investigators also are facing a lawsuit from Mark Meadows, former chief of staff to President Donald Trump, over the Democrats' demands for his telephone records. Former Trump adviser Steve Bannon has been cited with a criminal complaint over his refusal to comply with committee demands, and already has demanded information about communications between the committee members and other evidence, to which he is entitled as a defendant.