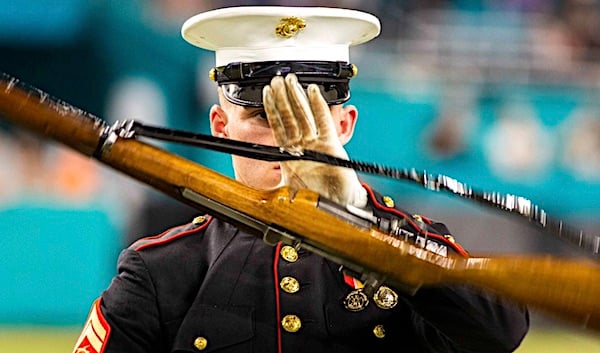 Three retired U.S. Army generals have warned of insurrection or possibly even civil war if the results of the 2024 presidential election are not accepted by sections of the military.

You'll never believe who should be held responsible – the Jan. 6 defendants.

In an op-ed for the Washington Post published on Friday and reported as a news story in Newsweek, the former military leaders said they were "increasingly concerned" about the "potential for lethal chaos inside our military, which would put all Americans at severe risk" in the aftermath of the election.

They warned of the potential for "total breakdown of the chain of command along partisan lines" and the risk of a "shadow government" led by a losing candidate who refuses to concede defeat, directly referencing former President Donald Trump.

"In short: We are chilled to our bones at the thought of a coup succeeding next time," they wrote.

They outlined four preventative steps they argue should be taken – all dangerous:

• First, the leaders of the Capitol riot should be held accountable. They called on the Department of Justice, the House of Representatives' Select Committee investigating Jan. 6 and Congress to "show more urgency."

• Second, the Pentagon "should immediately order" a soldier review on the Constitution and electoral integrity, and on the laws of war and how to deal with an illegal order. "No service member should say they didn't understand whom to take orders from during a worst-case scenario," they wrote. The Army's actions should also involve finding and removing "potential mutineers" and stopping efforts to subvert the chain of command through propaganda.

• Finally, the generals advised the Department of Defense to war-game a potential insurrection or attempted coup following the 2024 presidential election "to identify weak spots" and deal with them.

In explaining their concerns, the generals pointed to the fact that some veterans and active duty personnel were involved in the storming of the Capitol on Jan. 6 and expressed concern that divisions in wider society will affect military personnel.

"The potential for a total breakdown of the chain of command along partisan lines – from the top of the chain to squad level -- is significant should another insurrection occur," the generals wrote. "The idea of rogue units organizing among themselves to support the 'rightful' commander in chief cannot be dismissed."

"Imagine competing commanders in chief – a newly reelected Biden giving orders, versus Trump (or another Trumpian figure) issuing orders as the head of a shadow government," they went on. "Worse, imagine politicians at the state and federal levels illegally installing a losing candidate as president."

The generals warned that while U.S. service members take an oath to uphold the Constitution, in the case of a disputed election, loyalties would be split and some might choose to follow orders from the losing candidate who does not accept defeat.

"Under such a scenario, it is not outlandish to say a military breakdown could lead to civil war," they wrote. If such a situation were to arise, the generals warn the enemies of the U.S. could take advantage of it.

Nonetheless, the generals seemed hopeful that could be prevented if Congress and the military "take decisive action now."

Why now? Why not wait for the new Congress?