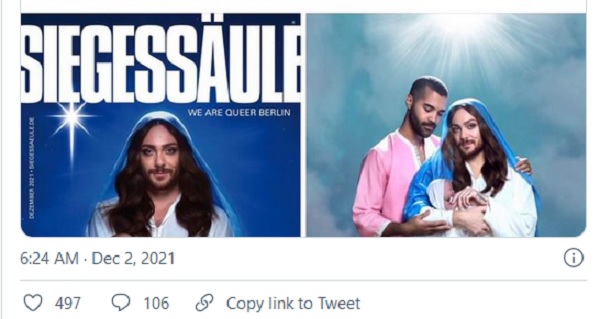 An LGBT ambassador to the European Union Parliament has used one of the world Christian community's biggest holidays, Christmas, to insult that community, appearing as a bearded Virgin Mary.

The images of Riccardo Simonetti appeared on the cover of a German magazine.

The Daily Caller News Foundation reported, "The photos show a bearded Simonetti in a tunic and veil, holding a baby who is presumably representing Jesus. In another photo he is holding the baby with another man, who appears to represent Joseph, wrapping his arms around Simonetti."

Simonetti, on social media, taunted, "If we ignore the fact that Jesus wasn’t white, we could as well believe the Virgin Mary had a beard, why not?"

Let me introduce you the #LGBTQ ambassador of the European Parliament.

How else could the famously tolerant and respectful rainbow community celebrate advent if not with a blasphemous, pointless provocation?

Share this & use #RespectAdvent to call for Simonetti’s resignation. pic.twitter.com/2PFcdVJqvl

"Now do Trans Muhammad. I dare you," wrote Pascal-Emmanuel Gobry of the Ethics and Public Policy Center on social media, and Hungarian journalist Peter Heltai said, "How else could the famously tolerant and respectful rainbow community celebrate advent if not with a blasphemous, pointless provocation?"

The Washington Examiner explained the "bearded and tattooed" Simonetti "wore the veil and tunic like the Virgin Mary while holding a baby who appears to be Jesus."