All signs suggest the Republican Party is slowly marching toward a massive victory in the November 2022 midterms. Poll after poll shows the American people becoming increasingly fed-up with the authoritarian regime of Joe Biden and his comrades in Congress. But while many party officials are celebrating this as a victory for conservatism, rank-and-file activists remain skeptical. We know that running as a Republican doesn't equate to legislating as a conservative. Our voters have been burned by Republicans-In-Name-Only before.

In 2022, vague statements like "I support President Trump" or "I am for the MAGA Agenda" from so-called Republicans will not be enough to earn our support. We need to define precisely what we want them to do if elected and secure those promises in writing.

House Minority Leader Kevin McCarthy, R-Calif., has begun to lay out a platform with his parent's bill of rights, and new Freedom Caucus leader, Rep. Scott Perry, R-Pa., is calling for Republicans to pledge to impeach Attorney General Merrick Garland to prove their is a difference between Republicans and Democrats. But that is not nearly enough. If we genuinely want the Republicans to act to restore our nation once we return them to power, as they must, then voters need them to make and keep a pledge that will accomplish that goal.

At the We the People Convention, we are proposing a platform pledge that all candidates wanting grassroots support must sign. It includes key conservative principles like ending chain migration, a balanced budget amendment and supporting measures that oppose Critical Race Theory. You can view our comprehensive proposal at our website.

If candidates claim that they want to shrink the size of government, defend our freedoms and restore prosperity, then they need to commit to it in detail and on paper. Some people will be skeptical of the effectiveness of the pledge, but as past tax pledges have proven, when you get a candidate's word on paper, they either keep their promise or end up primaried out of office.

We have a straightforward three-part plan to make this pledge a driving force in the Republican primaries.

First, we need you to print this contract and give it to every Republican planning to run for the U.S. House or U.S. Senate in your state.

Then, we want you to send the signed copy from any candidate who does agree to vote for these items to the We the People Convention at [email protected], and we'll share it with President Trump's team.

Third, we ask that you to report back the names of those "Republican" candidates who will not sign the contract, particularly incumbents who are running for reelection, so that we can report that to President Trump as well and urge him not to endorse those candidates.

Ultimately, we will create a national primary voter guide so those who support President Trump can know whom to vote for and work to elect in their state's primary election. That list will turn into a scorecard for tracking how Republicans voted while in office. Come 2024, we'll know who kept their word and who betrayed their constituents and needs to be shown the door.

We stand at the precipice. We are in a real war. We must defeat the radical left, and we must do it now or our nation will be lost. We have one opportunity to save the country we love. To do so, we must elect warriors, not RINOs. This pledge will help us determine which candidates fit which label before we vote!

That is why I ask for the participation of all patriots in this national effort to inform Republican candidates so that we can have a mutual understanding of what We the People expect from those we elect before returning them to power in 2023 and beyond. Only then can we make America great again! 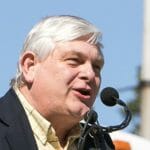 Tom Zawistowski
Tom Zawistowski is Executive Director of the Potage County Tea Party and President of the We the People Convention. He is a past president of the Ohio Liberty Coalition.
Needed for a Red Wave: Warriors, not RINOS
Attack on Trump: RINOs are responsible too!
See more...