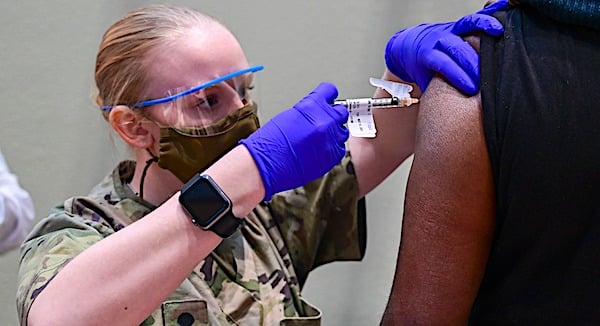 An CNBC show host who previously insisted that the military be used to forcibly vaccinate Americans against COVID-19 now says the government has the right to "force" people to obey.

The new statement from Jim Cramer is, "government has a right to force you to obey and has always exercised it especially under GOP."

Earlier, he claimed the military has to be used to give shots to everyone:

At that time, he said, "This charade must end. The government must require vaccinations, not of this group or that group, not company by company, not cruise ship by cruise ship or airline by airline or governor by governor. The buck stops at the White House."

He said, "We have immunocompromised people who are incubators for every variant to come walking around lawfully unvaccinated? That's psychotic. We have companies that have tried hard to get people vaccinated and now are backing down. We have governors who want to be president by grandstanding on a foolish states' rights issue, the right to get sick? To get other people sick?

"It's time to admit that we have to go to war again against COVID, require vaccinations universally. Have the military run it. If you don't want to get vaccinated you better be ready to prove your conscientious objector status, in court."

The Hill explained the diatribe came during his "Mad Money" program.

His latest rant was the target of criticsm on Twitchy, where one commenter pointed out a review of rights might be in order.

Another commenter wondered, "You ok over there, Jim?"

And "Eliza" noted, "My trafficker used to say the same thing."