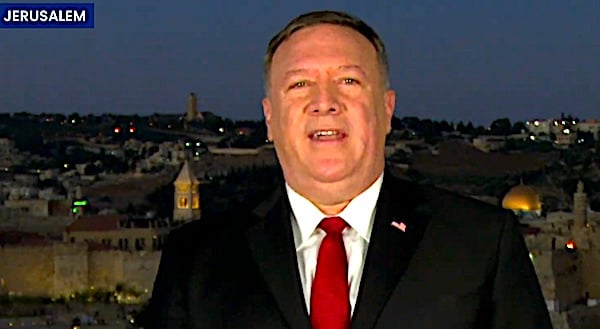 Former Secretary of State Mike Pompeo has renewed his call for a complete boycott of the planned Olympic Games in China in 2022, charging that if held, they would be "stained" as were the 1936 Games held in Adolf Hitler's Germany.

"The Chinese Communist Party (CCP) has disappeared reporters writing about the Wuhan virus and doctors telling the truth about CCP labs. They’ve disappeared Peng Shuai, a professional tennis player who challenged their authority. They’ve disappeared Uyghurs and Hong Kongers and the head of Interpol. These tyrants have acted with impunity for far too long, and it’s time the world holds them accountable. We should disappear the Olympics from China and hold it in a place of which the world can be proud," he wrote in a column for the American Center for Law and Justice.

"The Olympics have long been about competitors coming together on a fair playing field. It would be a betrayal of this tradition to hold the games in a country that, on the international stage, has habitually disrespected rules and norms. China views itself not as our competitor, but our adversary. Their disregard for human rights at home and abroad should be reason enough not to grant them the prestige and honor of hosting these important events. It would offer legitimacy to a Communist regime that deserves our scorn and rebuke."

He had insisted as early as last April that the Olympics should not continue as scheduled.

A report in the Western Journal noted the Chinese Communists' often deadly treatment of the Uyghurs, a mainly Muslim ethnic group, is reason enough.

That "treatment" was described as "systematic persecution" by the Western Journal, which cited China's known internment camps, forced labor and even forced sterilization and killings.

Pompeo had declared, in the closing days of the President Donald Trump administration, that China was, in fact, committing "genocide."

Antony Blinken, who now serves in the post of secretary of state for Joe Biden, has agreed with that designation.

The Washington Examiner reported Monday the U.S. could announce a boycott as early as this week and China already was threatening reprisals.

The Biden administration was expected to start out with a "diplomatic" boycott, meaning athletes could participate but U.S. officials would not attend.

Even to that idea, Zhao Lijian, China's foreign ministry spokesman, said, "The U.S. should stop politicizing sports and hyping up the so-called 'diplomatic boycott' so as not to affect China-U.S. dialogue and cooperation in important areas."

Back in the spring, Pompeo said he hoped the International Olympic Committee would find a way around allowing Chinese President Xi Jinping to host the games.

Now, in the ACLJ column, Pompeo said allowing China to hold the Olympics would be as bad as the decision to let the Nazi regime in Germany have the honors last century.

"In the modern day, these characteristics have remained fundamental to the Olympic games. People around the world can feel pride in their own athletes’ accomplishments, while the host country gains the prestige and recognition through the hospitality and accommodations it provides to participants and representatives from the rest of the world. The world’s gathering at the Olympics is tacit approval of the host country by the participating countries. That is why the games were badly stained when they were hosted by Hitler’s Germany in 1936 and why they will again be stained by the Chinese Communist Party’s genocide in 2022," he said.

He explained, "Boycotting the Olympics would not just be a political statement; it would be in the best interests of the health and safety of our athletes. The Olympics and the NBA should follow the lead of the World Tennis Association which has suspended tournaments in China because of the CCP’s behavior."

He explained, "We know the history of the 1930s. We know how many senior leaders looked the other way when there was a Holocaust taking place in Germany. The things that are happening in China today are not only reminiscent of those terrible events, but have the staggering potential to surpass them. Senior leaders, governmental leaders, business leaders, and leaders of non-profits all need to take seriously their responsibility to make sure that they do not contribute either directly or indirectly, toward furthering the Chinese Communist Party’s capacity to engage in genocide against the Uyghur people."

Well-known China expert Gordon Chang wrote a column just last month explaining it now is time to take the Olympics away from China.

"Only the morally bankrupt could think it is a good idea to allow the hostage-taking, rapist-protecting, genocide-committing Chinese regime to host this competition," he explained in a column at the Gatestone Institute, where he is a distinguished senior fellow and a member of its advisory board.

"There is only one correct choice: Move the Games," he said. "For decades, people overlooked the great crimes of Chinese communism because they had hope that it would, over time, evolve and become benign."

The Women's Tennis Association recently canceled all its events scheduled in China.

Chang continued, "No ruling group that organizes rape, slavery, mass detention, torture, killings, and organ harvesting should be permitted, among other things, to host international sporting events. The International Olympic Committee maintains that these atrocities are none of its business. Yet the protection of athletes is. Peng's detention tells us athletes will not be safe in China."