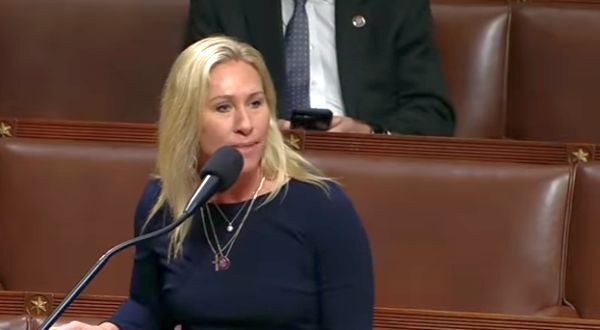 Rep. Marjorie Taylor Greene, R-Ga., has been in Congress for only a few months, but the Georgia lawmaker has already set herself apart from most of her Republican colleagues by standing with the Jan 6. political prisoners.

In an exclusive interview with WND, Greene warned that Americans must brace for a dark time and should gameplan how to defeat a malevolent government unlike any the nation has ever seen.

“We have a communist government in charge,” Greene said. “This administration – the policies, their behavior and the way that they are targeting their political enemies – is what we are used to seeing in communist countries.”

“Americans just aren’t used to seeing it here,” she said. “People are going to have to take a different approach and start looking at their government with complete distrust and skepticism, because the government right now is targeting you if you’re a conservative and especially if you’re a Trump supporter.”

Americans will need to prepare for even more government overreach and devise a strategy to fight back, “while there is still a window of time and the U.S. Constitution to protect us,” the freshman lawmaker argued.

Greene, along with just a handful of other GOP members of Congress, is particularly concerned about the appalling treatment of what many are calling political prisoners in the wake of the riot at the U.S. Capitol on Jan. 6. The FBI has embarked on a nearly year-long manhunt for Trump supporters who descended on the nation’s capital that day. Those who protested what they saw as a hijacked U.S. election by entering the nation’s Capital are being used as an example to intimidate all those who dare oppose the Biden regime, says Greene, as they languish in a D.C. jail.

Some of the Jan. 6 defendants nonviolently stepped into the Capitol Building for just minutes, but have been forced into small jail cells in solitary confinement for months and have yet to stand before a judge.

“If you’re someone that was here in Washington, D.C., on Jan. 6,” Greene told WND, “the FBI could raid your home if they haven’t already. The Department of Justice could charge you because you may have walked through the Capitol, which was a really bad choice, but if you walked through and you haven’t been arrested, they are still looking for you and you are going to be arrested. This is the reality that we’re in. It’s not going to go away anytime soon.”

“What people are going to have to start to realize is we aren’t dealing with an ordinary government. The election of 2020 wasn’t your typical swing of the pendulum back to the left and having their turn in power. The pendulum got completely ripped off on Nov. 3, 2020. We must all be very honest – Democrats are finally showing us their true colors – they are communists.”

Speaking at a press conference on Tuesday, Greene described the abusive treatment Jan. 6 defendants are being subjected to in the D.C. jail.

“They have been beaten by the guards. They are called white supremacists. They are denied religious services, haircuts, shaving, the ability to trim their fingernails,” she announced, standing alongside GOP representatives Louie Gohmert, Matt Gaetz and Paul Gosar. “They are told that they have to denounce President Trump. They are told that their views are the views of cult members – even though these are men that every single night at 9:00 at night, they put their hand over their heart and sing the national anthem voluntarily.”

In a 28-page report titled “Unusually Cruel: An Eyewitness Report From Inside the DC Jail,” Greene details the relentless and desperate efforts by the D.C. mayor and Department of Corrections to prevent members of Congress from touring the jail and the degree to which Jan. 6 defendants are marginalized in the jail for their political beliefs.

The report is here.

Immediately after the press conference, many on the left took to social media to castigate Greene for her “white privilege” and “white fragility.”

#MTG: Jan. 6 defendants are being mocked in jail 'because of the color of their skin'. No, they're being held accountable for their actions. But you're so used to white privilege that when you can’t depend on it to save you, you think it’s discrimination https://t.co/cNBjGrSqTZ

My god this white fragility victimhood is pathetic >>> Marjorie Taylor Greene: Jan. 6 defendants are being mocked in jail 'because of the color of their skin' https://t.co/zH25TarYTi

Those in the alternative media committed to exposing the all-encompassing propaganda campaign waged by global elites are among the primary forces impeding a complete communist takeover of America, Greene argued.

“Especially Alex Jones and InfoWars and Steve Bannon, those that are finding themselves to be targets of the Jan. 6 Committee,” she said. “They are being so brave and courageous and fighting back. Don’t lose hope, do not back down, and remember that we still have our Constitution right now.”

Ordinary Americans can no longer afford to live ordinarily when complacency and compliance exacerbate the crisis, Greene admonished.

The 2020 election, she told WND, was not legitimate, “but staying home is not the answer. We have to get people out to vote. We have to get people volunteering to watch all the different polling centers, not just on Election Day, [but] the days and weeks leading up to Election Day volunteering and the days afterwards,” she said. “People are going to have to get comfortable being uncomfortable. That’s the only way we are going to stop it. That means taking a strong stand.” She added, “I am not talking about violence.”

She urged Americans to call and demand accountability from every member of Congress that has chosen to turn the page on the 2020 election, on the Jan. 6 political prisoners, and on unconstitutional government mandates.

“This is really important: Call my colleague’s offices,” she said. “A lot of Republican voters just aren’t used to doing this. I am not talking about death threats; I get plenty of those. I don’t encourage that. I mean, call members of Congress.” She added, “I give out my Republican colleagues’ office numbers and tell voters to call them. Republican office holders need to hear from Republican voters and that’s a really good way to organize them. Let me tell you, that makes a difference.”