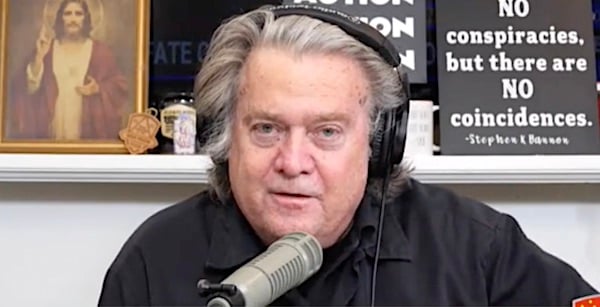 Steve Bannon, a former adviser to President Donald Trump, has determined that CNBC show host Jim Cramer is a "goofball."

After all, he's been demanding the U.S. military forcibly give Americans COVID shots, after he voluntarily took them.

But now he's come down with COVID.

The subject came up during Bannon's podcast.

He blasted Cramer for wanting the military to put people in concentration camps.

"This is not right wing," Bannon charged. "He said it."

"How can you be on a network advising people on their finances. You're a goofball," Bannon said. "Of course you took the shot you moron … You want to force it on your fellow man."

WND reported just days ago that Cramer wants the U.S. military used to forcibly vaccinate Americans. He said the government can "force" people to obey.

The new statement from Jim Cramer was, "government has a right to force you to obey and has always exercised it especially under GOP."

Earlier, he claimed the military has to be used to give shots to everyone:

At that time, he said, "This charade must end. The government must require vaccinations, not of this group or that group, not company by company, not cruise ship by cruise ship or airline by airline or governor by governor. The buck stops at the White House."

He said, "We have immunocompromised people who are incubators for every variant to come walking around lawfully unvaccinated? That's psychotic. We have companies that have tried hard to get people vaccinated and now are backing down. We have governors who want to be president by grandstanding on a foolish states' rights issue, the right to get sick? To get other people sick?

"It's time to admit that we have to go to war again against COVID, require vaccinations universally. Have the military run it. If you don't want to get vaccinated you better be ready to prove your conscientious objector status, in court."

The Hill explained the diatribe came during his "Mad Money" program.

His latest rant was the target of criticsm on Twitchy, where one commenter pointed out a review of rights might be in order.

Another commenter wondered, "You ok over there, Jim?"

The New York Daily News reported Cramer confirmed on Monday he had tested positive for COVID-10.

He's 66 and reported he is vaccinated and boosted.

"The problem is, is that it just works so fast,” Cramer said. “You can’t stop it. Meaning that I can test in the morning and feeling great and test in the evening, feeling great, but then I’m giving it to people."

He continued, "The goal is I think to be able to assume the risk,” Cramer said on CNBC. “You want to go out. You want to go to the movies... and you are triple vaccinated, other than the fact that you’ve got to stay home, which is a huge bummer, there’s never a cold that I have had that was as weak as this, ever.”